Alien Species
Register
Don't have an account?
Sign In
Advertisement
in: Men in Black Universe, Unnamed Species, Humanoids,
and 10 more 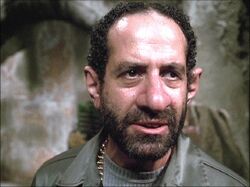 Ed Solomon
This humanoid race resembles Humans, except their heads regrow an infinite number of times when shot off. They seem to have green blood. Jack Jeebs and Dak Jeebs are members of this species.

Members of this species don't need oxygen for breathing, but still need it for regenerating. As a result, they can survive in the vacuum of space but cannot regenerate there. Physically, they greatly resemble Humans, but their blood is green. Their regeneration is rather quick, and they are able to speak and sense during the process. It is known that despite their fast regeneration, having their head destroyed is still known to cause them pain, and sometimes, certain traits do not properly regenerate, such as their taste buds. In addition, they appear to have at least one organ that does not regenerate.