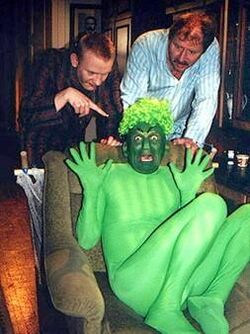 J-23 native next to Humans.

Natives from planet J-23 are humanoid sapient species with dark green skin and light green hair. Their planet is located 27 light years from Earth and has much lower gravity.

Their have spaceships with FTL technology and rejuvenating cabins.

Signals from Earth reach J-23 with 27 years delay. On this planet popular are Human television, including Polish TV programs and soccer matches. Many J-23 citizens understood Polish language and is fascinated in soccer, but because of low gravity, they aren't able to organised matches.

In 2002 J-23 native, called later as Ufiak landed in Wrocław, Poland to learn how Polish football looks in that year. He make contact with local Humans. After learning that actual Polish representation is weak, he along with local people decided to change it. After that Poland has made representation at the world championships FIFA World Cup that consisted of 1 human and 10 J-23 natives. This representation became World Champion of soccer.

Retrieved from "https://aliens.fandom.com/wiki/J-23_native?oldid=182486"
Community content is available under CC-BY-SA unless otherwise noted.