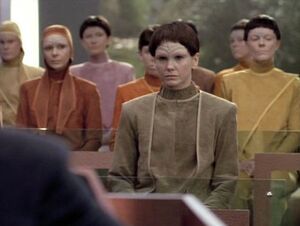 The J'naii are a sapient, spacefaring race of androgynous humanoids which have rejected the idea of gender.

Despite being genderless, the J'naii aren't asexual and still reproduce with each other. Their mating habits have been described as involving a long ritual, "full of variety and invention", and which is extremely pleasurable for them. The ritual ends with both parents inseminating a fibrous husk, in which the fetus will be incubated.

Before evolving into their current androgynous state, the ancestors of the J'naii were dioecious, not unlike most humanoids.

When in cold temperatures, J'naii have the custom of sleeping together with a friend to keep themselves warm. This particular act has no sexual connotations in their culture. As they have no gender, they have developed other ways to define certain customs, for instance: when two are dancing together, the taller shall lead.

As a culture, the J'naii regard gender as a primitive concept, and those few individuals which are born with a gender identity (viewing themselves as male or female) are considered criminals and evolutionary throwbacks. These individuals make up a persecuted subculture in J'naii society and often seek each other for mating ("females" seeking "males" and vice-versa). They're forced to hide their gender identities to avoid being captured and sentenced to psychotectic treatment, which is intended to "cure" their condition. As the J'naii government regards these individuals as sick, they believe they're being helpful by providing a way to remove their gendered inclinations and reintegrate them into society.

Retrieved from "https://aliens.fandom.com/wiki/J%27naii?oldid=138529"
Community content is available under CC-BY-SA unless otherwise noted.