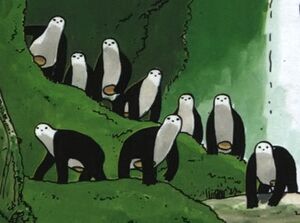 None (consume air and water)

Named after the characteristic sound they make; the Iums are a sapient quadrupedal race native to the planet Betelgeuse-6, which share a symbiotic relationship with the Cave Mantris.

The internal skeleton of a Ium isn't too dissimilar from that of an Earth mammal, save for one extraordinary peculiarity: despite being quadrupedal, they have no bones in their limbs. Instead, they have hollow cartilaginous tubes which anchor extremely powerful muscles, giving them exceptional strength.

Additionally, they don't appear to have jaws, or even a mouth, and their digestive system consists solely of a "battery" organ lodged inside their abdomen. This "battery" produces energy and allows the Iums to survive without consuming anything solid, although they still require to breathe and occasionally drink water, which is inhaled through their nostrils.

The entire existence of the Iums depends on a symbiotic relationship shared with the Cave Mantris, which is responsible for making their "batteries". In exchange, the Iums spend most of their time gathering fruits for the Mantris.

Iums are passive and gregarious creatures which communicate with each other by vocalizations which, to Human ears, appear to consist mostly of the word "Ium".

Their technology is limited to using stones and other objects available. For the most part, they rely on their supreme physical strength for defense. However, they have been known to build complex structures, such as temples nested within caves. Although they know how to make fire, they have comparatively little use for it, given that they don't require food.

The Ium temples are dedicated to the Cave Mantris, which the Iums seem to worship religiously, as they've been observed to bow in its presence. In many ways, they seem to regard the Mantris as a sort of communal mother figure. Their ceremonies involve burning hallucinogenic herbs to induce a state similar to a trance.

The Iums were originally created by the Cave Mantris, who modified a previous native species from the planet to give rise to its symbiotic minions.

When the first Humans arrived on Betelgeuse-6, they came to regard the Iums as little more than animals, perhaps with an intelligence level similar to that of Earth's Dolphins and Gorillas. Some, however, held the opinion that the Iums were indeed fully sapient, even though there were no signs of civilization, roads, buildings or even significant tool-using on the part of the creatures.

Although initially friendly and approachable, the Iums quickly became hostile towards Humans following an attempt to capture a Ium for scientific examination. The Ium in question resisted and ended up being shot by one of the Humans.

Following that incident, the Iums started to react with immediate hostility whenever someone tried to approach them. The only known exception was a girl named Mai Lan, who became friends with the Iums.

Retrieved from "https://aliens.fandom.com/wiki/Ium?oldid=168777"
Community content is available under CC-BY-SA unless otherwise noted.