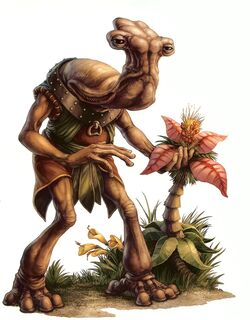 Ithorians are a race of beings in a galaxy far, far away, with reflexes and coordination that were considered somewhat slower than an average humanoid.

The Ithorians are notable and unique for possessing two mouths - one on each side of their head - and four throats, allowing them to speak to stereo. Their skin is glossy, and usually brown in pigmentation. On average, an Ithorian would measure between 1.8 and 2.3 meters tall (5'10" to 7'6") from the eyestalk to their toes. They also are known to display sexual dimorphism: females have two humps on their head, while males have but one.

Their stereophonic language allows them a very useful secondary function. The four throats have the ability to violently expel air, resulting in a deafening and concussive scream. This seems likely to be an evolutionary leftover once used as a defensive mechanism, as the strange talent is a usable ability by even common members of the species. However, those with Force training such as Jedi Master Roron Corobb could push enough power into their sonic bellow to shatter iron and shred plasteel. Even with such a powerful tool under their belt, however, many go their entire lives without ever having to resort to using this physically taxing ability, making its existence relatively ambiguous. Onca and Bulduga were bounty hunters. Stonk was a senator. Egdir was on the Colossus.

Retrieved from "https://aliens.fandom.com/wiki/Ithorian?oldid=184145"
Community content is available under CC-BY-SA unless otherwise noted.