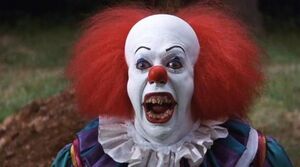 Its true form on the physical plane is a large spiderlike creature. This is not Its actual appearance, but is instead the closest approximation the human mind can perceive when looking at It in this state. Its real body is the Deadlights, a mass of writhing orange light lying within an otherdimensional space called the Macroverse. Looking at the Deadlights can cause catatonia or even death.

It arrived on Earth in an unknown period of the distant past, at some point between the extinction of dinosaurs and the evolution of humans. It came to Earth from the Macroverse in a spacecraft or meteor and crash-landed in an area that would later become Derry, Maine.

It lay dormant in the region for millions of years until the arrival of colonists from Europe. It awoke and fed on the populace at 27-year intervals. At one point in the early 1700's, It depopulated the entire town of Derry, but It later began to feed in a more discriminating way. It instead began targeting children, while beginning and ending each spree with a large-scale disaster of some kind.

It's true form in the 1990 miniseries
Add a photo to this gallery
Retrieved from "https://aliens.fandom.com/wiki/It?oldid=189120"
Community content is available under CC-BY-SA unless otherwise noted.