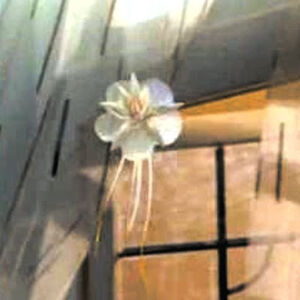 possession, containment of living beings in drawings and manifestation

Isolus resemble white flowers with tendrils and are able to float. They are extremely empathetic creatures who travel in groups in space.

Infant Isolus are spores that travel through space in groups until they can reach adulthood. They physically resemble white lilies with tendrils. Isolus require strong emotions such as love to survive, which is why the Isolus travel in groups so that they can feed off the love from their siblings.

The young Isolus pass time through using some sort of ionic power where they create a separate dimension to manifest anything they imagine into reality to play in. The ionic powers of the Isolus are able to transport animate and inanimate objects into the separate dimension and vice versa through drawings alone.

Isolus matures with its fellow Isolus companions through love and bonding. Love is deeply ingrained into their psyche such that when one Isolus was separated from its siblings, it quickly befriended a lonely human girl. The love of the little girl, however was not enough, hence through the manipulation of the Isolus, other children were kidnapped through the use of ionic power and transported to another dimension.

like the Tenza and the Time Lords the isolus have incredible psychic powers whenever they imagine some thing it will be transported into a separate dimension and will get transported to the current reality through entrances exits like a room with no one in it or small spaces like a box, so powerful they could create entire worlds if they wanted to in range of their powers being used. However it is shown also shown to be vice versa as well. when the isolus gave her it's Chloe Webber it power whenever she draws something derived from her imagination that copies the identical thing in reality the drawing will trap the thing in drawing in the seperate dimension.

If Chloe's drawings are based on something alive ant not something based a exsisting being like a human the drawing not only comes to life but the energy that makes up the isoleses powers will give them a conciousness, like the Scribble creature Chloe made out of fustration. The main purpose of this power is to keep the isolus happy because of their strong lifespan.

Isolus utilize heat-powered pods to travel through space. The pods seem to be able to detect a heat source and track it back by itself.

An Isolus got separated from its siblings after a solar flare and landed into Britain in 2012 a few days before the Olympics. It befriended a lonely girl, Chloe Webber, and allowed itself to be swallowed. Children from the city started to vanish as the Isolus required more friends. Rose Tyler, companion of The Doctor, found the missing space pod and recharged it using the Olympic Torch allowing the Isolus to finally leave the body of the girl to find its family again.

Retrieved from "https://aliens.fandom.com/wiki/Isolus?oldid=185562"
Community content is available under CC-BY-SA unless otherwise noted.