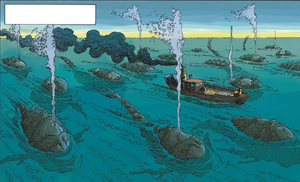 Whale-like creatures that inhabit the seas of Altair-3. They look similar to humpback whales save they are armored plates.

Ironclad Whales are viewed with wariness by the human settlers noting that they are nothing like the peaceful whales of Earth. They are known to be a tad aggressive towards sailing ships. However further investigation revealed that the Ironclad Whales are intelligent to a degree that a Stephanerk is able to converse with them.

A pod is lead by a chief. The ships these whales attack are mostly due to being in the vicinity of their rest areas. These rest areas are locations of yearly gatherings for their females to calve.

Retrieved from "https://aliens.fandom.com/wiki/Ironclad_Whale?oldid=184958"
Community content is available under CC-BY-SA unless otherwise noted.