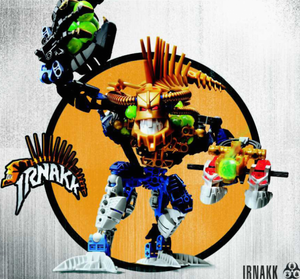 Irnakk was a fictional entity in Skakdi mythology in the Bionicle Universe.

Irnakk was conceived by the Skakdi on Zakaz to fill their subjects with fear and terror. In the stories Irnakk wold destroy entire towns.

When the Piraka, went to claim the Kanohi Ignika, they passed through the Zone of Nightmares. The chamber used its powers to turn their worst nightmares to life, Irnakk. The Piraka were helpless against the myth, until they realized that their fear was bringing him into existence. After the let go of their fear, Irnakk vanished.

Irnakk's could use his vision to remove a physical being from the world and make it an object of pure thought within the mind of the nightmarish being. Another of Irnakk's abilities causes the target's worst fear to manifest itself in reality.