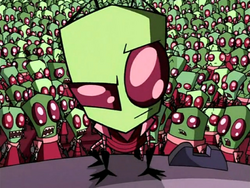 Jhonen Vasquez
The Irkens are a race of typically short-statured sapients indigenous to the planet Irk.

The sole goal of the Irken Empire is total universal conquest; they mostly attain this feat with the aid of their vast armada, which aids in planetary destruction via a sort of final attack called the "Organic Sweep".

Irkens are humanoid in structure, but have light green skin, and are similar in appearance to the stereotypical "little green men." Irken spines curve more backwards than humans', making their ordinary posture a kind of reverse slouch. Irken eyes are very different from human ones, and, instead of having pupils and irises, are a solid color: their eye color is typically red, but some Irkens possess various shades of purple, pink, green, blue, and yellowish-brown eyes. Irkens also possess a pair of prehensile antennae atop their heads that appear to act as sensory organs, since Irkens lack ears or noses.

While Irkens do not possess sexual organs, as they grow their young artificially, they are often gendered in the human fashion. "Male" Irkens have smaller, lashless eyes and straighter antennae, while "female" Irkens tend to have curly antennae and slanted eyes with many eyelashes.

Irkens do not need to sleep, they are able to at times. It can be assumed that this is the reason why a bed has never been inside Zim's house.

Irken bodies have a much faster healing rate than any Earth creature. A minor wound will heal in seconds, and a severe wound may take several hours to heal. Dismembered body parts can be easily reattached to its original position in no time at all.

An Irken's skin is extremely sensitive to pollution found in water, as it burns them like acid.[1]

Irkens are vulnerable Earth meat and meat related substances, such as BBQ sauce.

The most unique aspect of an Irken's appearance, however, is the PAK that is plugged into his/her spine at birth. A small, backpack-like device, the PAK is the Irken equivalent of a Swiss Army Knife, containing multiple useful devices and weapons. More importantly, the PAK also functions as a secondary brain, containing backups of his/her memories, knowledge, and even social status. When an Irken's PAK is forcibly separated from its owner, that Irken has ten minutes to recover and reconnect the PAK, or they will die.

The most popular theory regarding reproduction is that the Irkens use a mass test-tube method, deeming natural reproduction obsolete. Using this method, the Irkens need not worry about overpopulation and unexpected births.

Technically, Irkens do not have parents: They are manufactured in birthing facilities and genetically engineered to suit their predestined purpose. Due to genetic shuffling, Irkens are born with different appearances and personalities to prevent the spread of a common illness just like normal development. When fully developed (indicated by a green smile on top of the capsule), the capsule which they developed in is removed and cracks open like an egg, then drops on the floor. With the sweet smeet (Irken baby) still unconscious, a robotic arm surgically attaches 2 PAK plugs and the PAK itself on its back. Another arm electrocutes it for a second, activating both the PAK and the smeet.

Once awake, the smeet is thrown/dropped into a chute that leads to another room, where a cable plugs itself into the smeet's PAK and transfers the Irken knowledge into its hard drive. This seems to be an efficient equivalent of teaching. After the transfer is complete, the smeet is put to another chute where a robotic arm puts a visor to his/her eyes and begins the virtual training that will last for 10 years (whether it be Irk years or Earth years is unknown, but it is likely Irken years).

An average Irken will grow to approximately the size of a human child. Other Irkens grow fat and wide (like Skoodge and Sizz Lor), medium height like Tak, or have a large head like Spleen, Larb, and Grappa. Apparently, some Irken can grow thin and tall (like Red and Purple). Some grow to be very short and develop a round head like Bob (Nicknamed by Tallest Purple as Bobby); however, this may be due to genetic engineering because of their height-based society. This would prevent any Irken to grow taller than the current tallest/s. When the reigning Tallest/s die, they search for another Irken second to height to the previous one and promote him/her as Tallest, regardless of social status. In the case where there are two Irkens of the same height, they both become Tallest like the current Tallests, Red and Purple.

Irken diet seems to consist of factory manufactured foods, otherwise known as snacks/junk foods. Some Earth foods and drinks cause pain to Irkens. Earth water (H2O) (and some products that consist mainly of water) can burn their skin. Earth meats also have negative effects on Irken skin. On contact, the meat slowly begins to fuse to their skin, inflicting pain and agony in the process. Even their immune system can't handle meat. In the episode Bolognius Maximus, Zim becomes infected with a "Bologna Virus" that he invents in order to turn Dib into a bologna. His plan backfires, however, and Dib infects him with the virus as well. He examines his body by collecting a sample from himself, and finds out that it fuses with his body much faster than Dib's.

When an Irken dies, its body naturally decomposes, its PAK is recovered (if possible), and all the data contained is transferred to the Data library located somewhere on Irk. It transfers all information about its former host; history, experiences, personality, medical records and DNA. Basically, the very essence of its host is transferred, where it will be used by other Irkens, as well as the next generation as part of the Irken Knowledge. Defective PAKs can not contribute, and are rejected by the control brain.

The Irken Empire is the militaristic governing force that rules their species. Their strength comes from their ruthlessness and large numbers, as well as their PAKs and weapons. Like Saiyans, they send solitary Irkens to take over planets in the name of universal conquest. Likely due to their naturally short statures, they place height above anything else, with the tallest of their species at any given time ruling the government, no matter how incompetent they might actually be. These officials are given the not-so-original title of "almighty tallest".

Irkens never get to know their parents. Instead, they are incubated in special machines until birth and at that point a PAK is attached to them with two wires connected to their spines. Once sent on a mission, they are issued SIR Units, robots that operate as vicious and deadly assistants, with one exception: GIR (who was intended as a prank SIR by the currently-ruling Tallests.) Irkens are typically sent on missions all at once in an event known as the Great Assigning. It is here that the elite soldiers of the Irken Empire are chosen to become invaders - special soldiers whose mission it is to first blend in with the indigenous life on a planet, collect intelligence on the populace, and prepare the planet for conquest by the armadas.

The vast majority of the Invaders are male, so whether females are rarer or Irken society is patriarchal is unknown. One of the previous Tallests being female (Tallest Miyuki) hints against the latter.

Irkens use personal names, but no last names, as they don't have families. 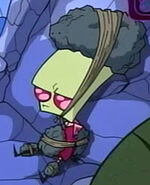 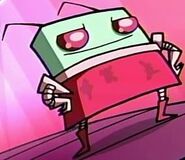