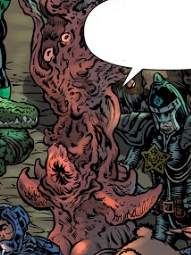 The Iog'g'gutth are a species that attended an Interplanetary Law Enforcement Symposium on Oa.

The Iog'g'gutth resemble a mass of writhing flesh.

Despite their appearance, Iog'g'gutth are not aggressive and constantly deal with prejudice based on their physiology.

Retrieved from "https://aliens.fandom.com/wiki/Iog%27g%27gutth?oldid=168775"
Community content is available under CC-BY-SA unless otherwise noted.