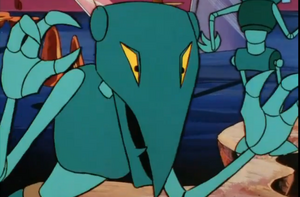 Filmation Ghostbusters Universe
The Invertroids were a robotic species from a place known as Home World that attempted to abducted thousands of humans via the mirror dimension.

Invertroids are somewhat insectoid, according to them they were originally organic but traded existence for robotic ones.

The Invertroids appears to possess advanced technology, such as dimensional and teleportation devices.

Synchronizers, weaponry that can send targets to a place known as the Lost Dimension.

Cryogenic technology to store their human prisoners and also mind transferring technology which they intended to use on Warm Bodies to gain possession of their bodies.

They were capable of accessing a dimension where mirrors allowed them to capture human hosts.

Retrieved from "https://aliens.fandom.com/wiki/Invertroid?oldid=138399"
Community content is available under CC-BY-SA unless otherwise noted.