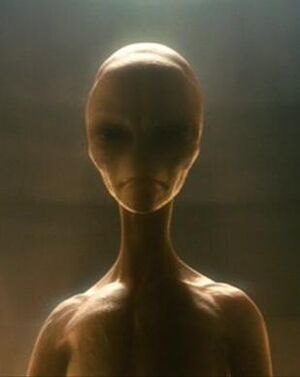 Unknown; seen as "another dimension"

Indiana Jones
Interdimensional Beings were a hyper-sentient and powerful species that influenced the beginnings of various Human civilizations.

Interdimensional beings were rather tall, humanoid beings with elongated craniums and sloped, large eye sockets that had supernatural and paranormal powers that could enhance hypnosis and magnetic qualities. Their skeletons were made of pure crystal, and they had no nose or ears visible.

They were extremely intelligent, as showing skills in multiple tasks, mainly agricultural needs and farming.

Thirteen beings arrived on Earth about 5,000 years ago (circa 3,000 BC). According to Harold Oxley, they were multidimensional beings not from space, but from the 'space between space', and they traveled with flying saucers.

According to the murals found in the entrance of Akator, the aliens taught the Ugha agriculture and irrigation. The Nazca worshiped them as gods and carved out the vast but shockingly shallow Nazca Lines in the deserts of Peru, in order to honor their gods. Indiana Jones noticed that the Nazca had the custom to wrap their children's heads with rope, or sometimes sandwich their heads with boards, to cause an elongated shape in order to 'honor the gods'.

Thirteen of those aliens were situated in the Temple of Akator, perhaps as a kind of ruling council, according to Irina Spalko they thought and acted as a hive mind and a single being. For some reason they were left there, presumably dead, as skeletons. Centuries later, the skull of one such skeleton was removed and the legend said that he who would return it would receive great power. Francisco de Orellana tried to find the temple and return the skull; however, he died before he could ever find the temple.

More aliens kept coming back to Earth to search for the missing thirteen. One of their vehicles crashed in Roswell in 1947. Indiana Jones was part of the team ordered to recover the remains of a 'mutilated' body in absolute secrecy. The body was kept in Hangar 51 until it was stolen by Irina Spalko's team ten years later.

When Jones, Spalko and their bands reached the Temple of Akator, they found thirteen crystal alien skeletons, one of them being headless; Spalko joined the skull to the alien's skeleton, which, through Oxley, started to speak in the Mayan language, saying it would give them a great gift. Spalko demanded to know everything and the thirteen alien skeletons started firing knowledge out of their skulls into her eyes. The Temple started to collapse, opening a portal to another dimension. Indy's band managed to escape from the temple. Meanwhile, the thirteen skeletons joined together to form a single humanoid being right before Spalko. The knowledge from the beings begins to overwhelm her and she begs it to stop. But the being, knowing her evil intention for its gift, gave her a menacing look as it continued to transfer knowledge. Spalko's eyes ignited and her body disintegrated; her remains were sucked into the portal. The other Russians in the room were sucked into the portal as well by their weapons and ammo belts.

Retrieved from "https://aliens.fandom.com/wiki/Interdimensional_Being?oldid=181350"
Community content is available under CC-BY-SA unless otherwise noted.