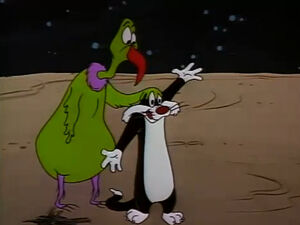 Instant Martians are the names given to a species of Martian that Marvin the Martian and likely many other Martians grew from seeds as quickly-deployable soldiers. They are dehydrated in their seed forms, and very quickly reconstitute with simple water. This could be an evolution due to Mars' current landscape — that of deserts — if one considers the possibility of Mars having very long periods of full-planet droughts. Also, because an Instant Martian can comprehend and follow orders immediately after reconstitution, it can be assumed that their seed forms found in fact a style of cryptobiotic tun similar to a tardigrade. Even so, they are either not particularly clever or even perhaps suffer from a sort of "reconstitution sickness" as they have been seen to be outsmarted by a simple, if particularly cunning, Earth rabbit.

Marvin the Martian has sent them after Bugs Bunny, but they were all outsmarted by him. Prior to this short, aliens that looked very similar to them were encountered by Porky Pig and Sylvester during a desert camping trip, which were on a mission to collect earthlings for experimentation. Younger members of them were also encountered by Duck Dodgers around the year 2350. One of them would also be caught sleeping on the job of guarding a ship and failing to notice as Bugs and Daffy hijacked it.

Retrieved from "https://aliens.fandom.com/wiki/Instant_Martian?oldid=157491"
Community content is available under CC-BY-SA unless otherwise noted.