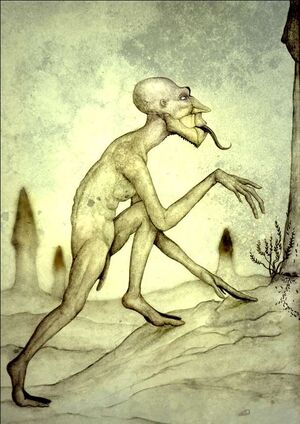 Evolved into the Bug Facers

The Insectophagi were a posthuman species created by the Qu from a colony of the Star People.

They were specialized in a diet of insects, having long, worm-like tongues for licking them up and large claws to break open the hills of eusocial insects. Their faces were covered in leathery plates to protect them from stings.

They later evolved into the Bug Facers.

Retrieved from "https://aliens.fandom.com/wiki/Insectophagus?oldid=169542"
Community content is available under CC-BY-SA unless otherwise noted.