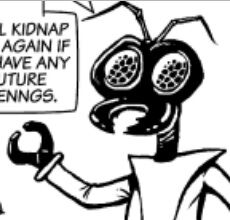 Insectoids are a hive-based species which resemble Human-sized ants with a black exoskeleton, large compound eyes, a couple of antennae and strong mandibles. Their hands are shaped like pincers. They're known to shed their skin when they molt. Like many Earth insects, they seem to feel a compelling attraction towards light.

Insectoids operate in hives and are ruled by a king and queen. They act with hostility towards other races, such as Humans, which they habitually capture and use for slave labor. Like many species in the universe, they travel through space in flying saucers. In their species, it is customary for the female to devour the male soon after wedding.