Insectoids[1] are a sapient race of yellow four-legged insects originally from an unknown planet before relocating to Atrocius 0.

Insectoids are preyed on by Terroranchulas, who can trap Insectoids and neutralize their plasma balls using their energy webs.

Insectoids can spit sticky green balls of plasma that they use to absorb matter with. The more matter is absorbed, the bigger the ball becomes. Upon impact, the ball will explode, with the explosion radius dependent on the size of the plasma ball.

Insectoids can alternatively spit streams of plasma, which are strong enough to hold a Tetramand.

Much like Earth insects, Insectoids are capable of scaling vertical surfaces and can fit into tight spaces as a result of their small size.

Insectoids are incredibly agile, capable of dodging sniper fire with grace and ease.

The plasma balls are very sticky and Insectoids can become stuck in them or subjected to their explosions if the balls are reflected back at them.

An Insectoid's plasma is useless against a species capable of withstanding it, such as Arburian Pelarotas.[2]

Because the Atrocians are unable to clean up after themselves, the Insectoids evolved as a natural sanitation solution to the Atrocian garbage problem. Once a week, Insectoids roll through Atrocian villages, sticky-balling up all the filth before blowing them up.[2]

The Insectoids have developed faster-than-light space travel. Since then, they have started highly successful sanitation services on other planets.[2]

The Insectoids came to Atrocius 0 after it was abandoned thousands of years ago. They have developed a symbiotic relationship with the Atrocians after the latter settled on other planets.[2] 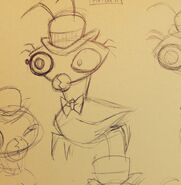 Habidash
Add a photo to this gallery

Retrieved from "https://aliens.fandom.com/wiki/Insectoid_(Ben_10)?oldid=183062"
Community content is available under CC-BY-SA unless otherwise noted.