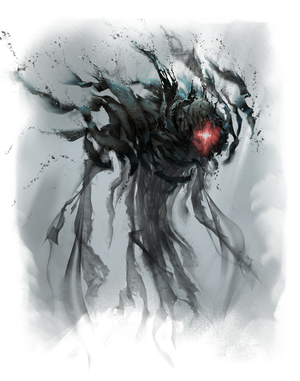 The Inner Voice is an Eldritch entity that came with all the other monsters once they arrived on Earth to destroy humanity and the human realm. They are considered masters of the Eldritch monsters.

Inner Voices are ghostly entities compared to other Eldritch, and seemingly cannot inflict physical damage onto other physical beings outside of its realm. They are able to be seen on rare occasions, taking the form of a humanoid-like shape, giving it an ominous look similar to the notorious reaper.

While unable to harm physically, that doesn't make it any less horrific. It is capable of telepathy, and will send its voice into other humans to discourage, humble, or at the very least distract them from survival. It is capable of "speaking" in perfect human language, and many a time it's often eager (at times too eager) for malicious intent.

Perhaps as a means to torture its victims, it is also capable of resurrecting the humans it wishes to mess with. Some believe it does this until it's satisfied, only then leaving them to die.

Retrieved from "https://aliens.fandom.com/wiki/Inner_Voice?oldid=181660"
Community content is available under CC-BY-SA unless otherwise noted.