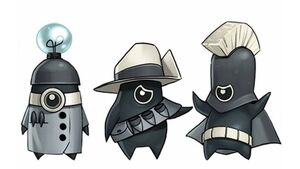 The Inky race is a species of Humanoid beings that originated from the "Greyness of Space": a colorless void of black and white dominated by this race.

Inkies are vaguely Humanoid in shape, much like the Raydians, only they are devoid of any coloration besides just black and white. They have four stubby limbs, and only one eye at the center of their face. They are often clothed in outfits similar to Earth Humans, most of which mirror a Militarist society.

Inkies are highly based off militarist positions and protocols, with many members of this species filling in roles often found in an Army or Navy: Generals, Scientists, Foot Soldiers, and other similar positions. All of these are lead under a single Captain.

Their treatment towards other Aliens is very hostile, with such examples as them turning Raydians into Blancs and Graydians, and making them their slaves. They have a severe hatred towards colors, and when controlling any planet they devoid it of any natural color until it's only in black and white, much like their home.

Retrieved from "https://aliens.fandom.com/wiki/Inky?oldid=182697"
Community content is available under CC-BY-SA unless otherwise noted.