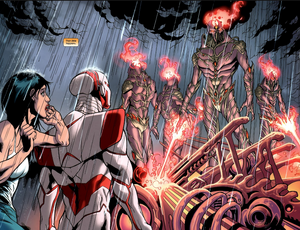 The Inheritors are an alien species from the future in the Stan Lee Universe.

The Inheritors are gargantuan purple armored giants with skulls that flare with flames. They are capable of traveling through time and casting energy blasts.

The Inheritors come from the future where they there was a war across all space. In this war the rules of engagement are different. The Inheritors were the victors, however at the cost of defeating their foe all life had to be destroyed. To restore life in the galaxy the Inheritors came to Earth in the 21st century through a Atemporal Conduit. Though Earth was a backward planet it held a secret. It was the source of all life in the galaxy. Their mission was to recover a smaple of genetic material and use it to reseed the galaxy.

Before they could complete their missiona Hybrid Soldier Zero interfered as they would destroy the Earth in doing so. The Inheritors initially regarded him a nuisance, but realized that he was no ordinary Hybrid but the Soldier Zero that would play an pivotal role in the future. Deciding not to risk altering the timestream the Inheritors retreated.

Retrieved from "https://aliens.fandom.com/wiki/Inheritor?oldid=172972"
Community content is available under CC-BY-SA unless otherwise noted.