Alien Species
Register
Don't have an account?
Sign In
in: Metroid Universe, Wildlife, Creatures with Unknown Diets,
and 4 more 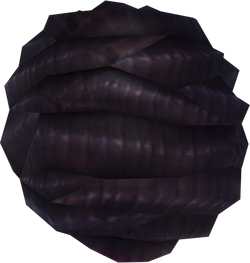 Ingworms are a species of wormlike Ing indigenous to Dark Aether. Ingworm have no offensive capabilities, and so are often used to simply store items for the Ing Horde; this breed is known as the Ingworm Caches. Ingworm Caches consist of a small writhing conglomeration of these weak Ingworms, which are wrapped around an item, and are intended to relinquish these items to the Ing themselves for their war effort against the Luminoth, and are placed in large quantities exclusively within the Ing Hive and the Sky Temple.

Interestingly, Ingworm caches are apparently capable of slight levitation; whether this is because even en masse they are not heavy enough to drop a floating item to the ground or whether they themselves can levitate is not known.

Some Ingworms are instead selectively bred to create large barriers against threats; these are simply known as Ingworms. Being Ing, they are highly susceptible to the Light Beam, although this is often considered a waste of precious ammunition. They will yield either ammunition or energy when breached.