The Ingsmasher is a mighty Luminoth combat mecha created during the Luminoth-Ing War. It is the strongest of all Luminoth warmechs (save for Quadraxis), designed to obliterate the ferocious Ing invaders. However, when the Ing learned how to possess machines, the Luminoth's powerful juggernauts turned on them, precipitating the shift of power from the Luminoth to the Ing. The remaining Ingsmashers that are still active have gone rogue, eliminating any being, Luminoth or not, that enters the Sanctuary Fortress.

The Ingsmasher's attack pattern is very much similar to that of Elite Pirates, with some exceptions. When Samus enters a room with sleeping Ingsmashers, they will either wake up and attack or lie dormant until she returns from the room beyond it. The Ingsmasher's primary weapon are their macelike metal knuckles, which it uses to unleash shockwaves by punching the floor or to project an energy shield composed of Light or Dark energy. The shield can easily be breached by using the beam that uses the opposite energy of the shield (Light Beam to Dark Shield, Dark Beam to Light Shield, Annihilator Beam to both). For its secondary weapon, the Ingsmasher uses a shoulder mounted launcher that it uses to fire explosive energy bombs when Samus is far away. 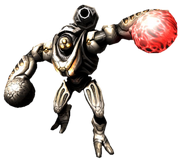 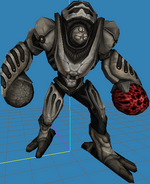 Another in-game model.
Add a photo to this gallery
Retrieved from "https://aliens.fandom.com/wiki/Ingsmasher?oldid=77868"
Community content is available under CC-BY-SA unless otherwise noted.