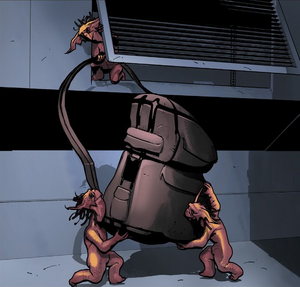 The Inglets are an alien species that appears in the Faster Than Light Universe.

Inglets are red-skinned diminutive humanoid creatures with the height of less than five inches.

The Discovery encountered the Inglets at the same time meeting the Boerboes. The little aliens posed as the Boerboes pets. While their thralls entertained the humans the Inglet masters scouted the Discovery for anything of value. They discovered the Tesseract and attempted to steal it, and nearly succeeded but the humans managed to reclaim the artifact. The Inglets were forced to retreat when a Nulian ship intervened to drive the miscreants away from The Discovery.

The Inglets were originally a parasitic vermin species that evolved on the same planet as the Boerboes. However the Inglets managed to climb to the top of the food chain. They enslaved the Boerboes, and even fed on them.

Retrieved from "https://aliens.fandom.com/wiki/Inglet_(Faster_Than_Light)?oldid=172971"
Community content is available under CC-BY-SA unless otherwise noted.