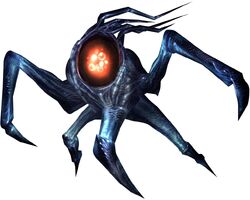 Not initially, but gain the memories of their victims, giving them the potential to be sapient.

Metroid
The Ing are shape-shifting creatures from the unnaturally-born side of Aether, namely Dark Aether.

The Ing can parasitically mutate and mind-control a host. This is referred to as "possession", for obvious reasons. They can possess any creature, living or dead, and are even capable of overtaking machines. While their possession of living organisms and machinery is a "simple" matter for them, they can only take possession of corpses if said corpse still possesses a central nervous system and so long as vital organs remain intact. Therefore, the corpse must be reasonably fresh. However, these "undead" host bodies tend to be both sluggish and poorly balanced, much akin to zombies.

Beings that have been taken over are known as "darklings". These generally have been augmented by the Ing's dark energy, and they also gain some of the abilities of the Ing that possessed them. This being said, they also contract the Ing's weaknesses -- chiefly, their vulnerability to light-based weaponry. When attempting to possess another creature, the Ing can either take on a mist-like form, or use a ramming attack to make abrupt physical contact.

Chozo Armor has been known to be resistant to this possession technique, but this is not because of the technologies of the Chozo themselves; this was instead due to an Energy Transfer Module housed within the bounty hunter Samus Aran's suit, who was wearing the only known Chozo Armor that actually came into contact with the Ing. This Module contained light energy, thus making it ideally resistant, and perhaps even completely immune to their possession techniques.

The Ing choose not to possess creatures who are devoid of either weapons or some form of attack, and are in this way quite fond of possessing Human Space Marines of the Galactic Federation, and even more fond of Space Pirate footsoldiers and commandos. They prefer these creatures not only for their weaponry, but also for their militaristic ability to take orders without question or second thought, as this makes their minds easier to overtake. They will also ignore any technology that does not shoot, and any inedible organism.

Due to their affinity to violence, they constantly squabble over the best warriors to possess. As a matter of status, only Hunter Ing are allowed to take over commandoes and other specialist troops.