The Infant Gaaahrling is the infant variant of the Great Gaaahr. 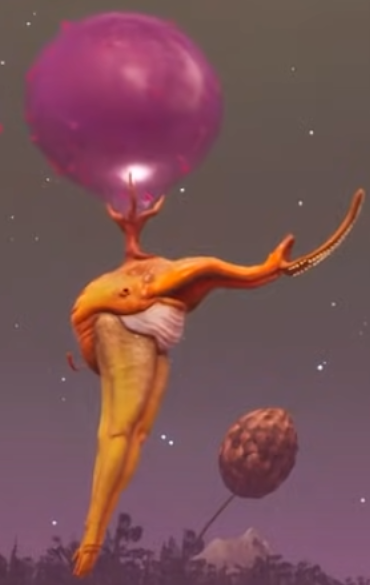 Not a separate species from the Great Gaaarh, but merely an earlier stage of its development. The three legs of the adult are not yet properly formed, functioning instead as a single appendage which the animal uses to bounce from spot to spot. Its sac is developed enough to lift it, but does so somewhat inconsistently. An Infant Gaaarhling may look silly, but its kick packs plenty of force.

The Infant Gaaarhling is a peaceful species which leaps around on its leg, its air sac allowing it to do so. Unlike the adults, they live in large herds, preferably around watery areas. Their smaller size also makes them more vulnerable to attacks from predators, although they can themselves if necessary with their leg.

The Gaaahrlings can also drop pink bombs like the adults, but in much higher numbers.