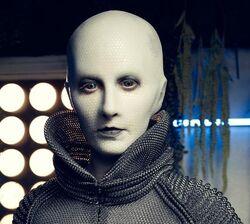 Defiance
The Indogenes are one of the member races of the Votan.

They have bright white skin and no visible hair follicles. Their heads are hairless and smooth; their external ears don't really protrude, smoothly merging with the rest of the head. They have hexagonal shaped irises, and their skin is covered in faint hexagon-shaped scales.

Indogene are covered in a substance known as Protoform which forms their epidermal layers and has a bright white color covered with a hexagonal pattern, they also have no visible hair, a hexagonal-shaped iris and metallic silver blood. Their epidermal layers can be altered with certain substance to make them take on the appearance of others. Certain body parts can be removed from them and reattached several days after. Indogene possess numerous genetic and technological implants, similar to those used by the Ninety-Niners, specific to their chosen professions; Indogene brains can be downloaded copying their genetic code and their stored memories and can be replicated.

Indogene rarely live away from colonies or centers of technology and value science and technology above everything else, some even willing to resort to harsh means to achieve their goals. The view adapting to new situations as an important experience and challenge. Indogene are typically atheists but have strong concepts of sin and forgiveness and after death their bodies will be burned and stored in small hexagonal boxes. The hexagon seems to have a lot of cultural significance to them, even their written language is based on hexagonal shapes. They have good relations with the other Votan races and have a unique relationship with Castithans as both feel they are the superior races, relations with Humans are difficult as they view them as brash and unpredictable. At birth Indogene are given a short names and later take on a second name based on the implants they receive and their chosen profession.

The Indogenes are the creators of some of the most advanced technology ever built and are very adapt at building new technology to suit their purposes by jerry-rigging Votan and Human technology. They created advanced artificial intelligences, terraforming devices, Caeruleum Cores, Charge blades, energy shields, stasis units and the propulsion and life support systems of the Arks.

Relations with other races[edit | edit source]

The Indogenes tend to get along well with all other Votan races. The Castithans, however, are something of an exception, as both races evolved on the same planet and each feels they are superior. However, Indogene-Castithan tensions are more along the lines of petty bickering than a deep-seated blood feud.

Their language is known as Indojisnen, a polysynthetic language that allows them to express in a single word that others would require five or six.

The Indogene were created by the Omec, who had developed Protoform as a sustenance after being pushed back to their planet by the Votanis Collective in the War of Six. They were created to be as cunning and unpredictable as possible in order to make hunting them a challenge and they soon became known as the Indo'edin which means 'they're learning'. At some point the Indogene turned against the Omec and most of them fled to Daribo. In response, the Omec created the Control stems to work with Indogene physiology and take complete control of them.

The Indogene lived alongside the Castithans and created their own separate culture. In 3502 BCE the Indogene discovered that the star Sulos was going to be destroyed in a stellar collision which would wipe out the entire Votanis System. Many of the other races did not initially believe in the Indogene's predictions but soon changed their minds and in 3449 BCE the Indogene began designing the Ark ships so the Votans could escape before the System was destroyed. They got to work on designing propulsion and life support systems.

In 3362 BCE the Indogene began terraforming experiments resulting in several failed tests but in 3317 BCE they successfully terraformed a planet orbiting Sulos which was appropriated by the Castithans who named it Casti. In 3175 BCE the Indogene went to the gas giant Gula to look for a power source for the Arks and made contact with the Gulanee and discovered Gulanite. The Indogene chose to only send the best and brightest aboard the Arks to Earth when selection began in 3006 BCE and many of them boarded 5 years later. A council of Indogene built the Kaziri and sent is ahead of the fleet in order to terraform Earth before the Votan's arrived. Some Indogene shapetakers went undercover aboard the Omec ships and sabotaged them to prevent the Omec from following the Votans.

Indogene took turns coming out of stasis during the journey to help maintain the ship and when they arrived at Earth a group of Indogene shapetakers captured the crew of the Space Station Bravery and created several Indo-sapiens to infiltrate Earth but never used them. The Indogene studied signals coming from Earth and learned how to speak by watching TV shows. During the Pale Wars Indogene worked on ways to fight the Humans including the Biodyne Pathogen and in 2025 a group of them were captured in Seattle. After the war a group of Indogene discovered a crashed Ark near Edmonton and set up a barrier around it and began working inside. In 2037 some Indogene engineers were hired to help strengthen the substructure of the Gateway Arch.

Retrieved from "https://aliens.fandom.com/wiki/Indogene?oldid=198742"
Community content is available under CC-BY-SA unless otherwise noted.