The Incurseans are a race of militaristic and technologically-advanced frog-like aliens from an unnamed planet that was destroyed long ago.

The Incurseans look like anthropomorphic toads. Some male Incurseans have slim bodies, warty toad-like heads and yellow eyes. Others have larger forms with an even more batrachian appearance.

Female Incurseans look little like the males due to having female mammalian traits. Thus, they look almost completely Human except for green skin, yellow sclera with red-pupiled eyes, and a slightly larger mouth.

Most Incurseans have very poor diets,[2] justifying why Bullfrag looks more developed than other Incurseans.

Incurseans appear to grow faster than Humans. For example, Attea went from looking like a child to a teenager in a few short years. However, this is more of a different form of aging than accelerated aging. There are times in an Incursean's life when they go through growth spurts.[3]

Because their life span has not been determined, Incurseans could possibly even outlive Humans.[3]

Incurseans have long, frog-like tongues that are both strong and prehensile. They are also skilled in hand-to-hand combat and weapon proficiency.

Similar to Earth frogs, Incurseans possess enhanced jumping abilities. They can also inflate their chests to repel enemies and gain momentum they need to jump.

Incurseans can hold their breath underwater for four to seven hours thanks to their respirators, and can probably swim faster than Humans.[3]

Incurseans can survive in the vacuum of space for a limited amount of time.

Incurseans have very delicate noses,[1] meaning that they are sensitive to smells like burning rubber, compost, and even Methanosians. These aromas will cause them to faint.

Incurseans can be lifted by a species with as much strength as a Vaxasaurian or a Tetramand.

The Incursceans hold dominion over a substantial portion of space.[3]

Incurseans possess spaceships for intergalactic travel. In combat, they use blasters and wear blue or white armor.

In addition to their spaceships, Incurseans use other vehicle such as small fighter ships, hover tanks, and giant wheel-like vehicles armed with cannons.

The Incurseans have been a violent, spacefaring race for millennia. Their original homeworld was divided into many factions in an eons-long civil war. On day, an unknown warrior attempted to reunite his planet with the power of the sword Ascalon, which he stole from the Galvan Azmuth. The result of misusing the sword's power, however, ended up destroying the Incursean homeworld.

Fortunately, many Incurseans were able to escape the planet's destruction and have been space-faring to this day. Under the leadership of Milleous, the Incurseans have stepped up their game to become even more hyper aggressive warrior-gangsters out for galactic conquest around the universe.

Milleous' daughter Attea worked her way back into her father's good graces. She was once a general and has been given command of the Incurseans' celebrated Calaveras Legion. Attea did her best to act like a good and loyal soldier to her father, but had her own schemes going on behind the scene.

After several failed attempts in conquering the home planets of the Revonnahganders, the Chimera Sui Generi, and the Gourmands, the Incurseans led a full-frontal assault on the Earth. Despite the capture of Milleous, their Cerebrocrustacean ally Dr. Psychobos unleashed mutated To'kustars, prompting the Plumbers to begrudgingly exile Ben Tennyson and surrender themselves to the Incurseans.

However, Earth was spared from Incursean control because Attea manipulated Ben and his team into liberating the Plumbers and bringing Milleous to justice, enabling her to become the Incurseans' current empress. Along these lines, she has also developed a crush on Ben's Incursean form Bullfrag. In the aftermath, the mutant To'kustars were sent to the Null Void and both Milleous and Psychobos were taken into Plumber custody. 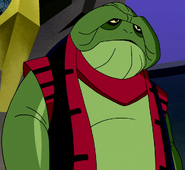 Sangfroid
Add a photo to this gallery

Retrieved from "https://aliens.fandom.com/wiki/Incursean?oldid=184129"
Community content is available under CC-BY-SA unless otherwise noted.