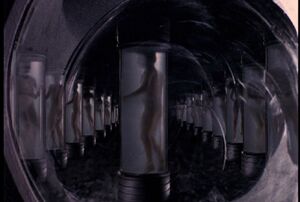 In Vitroes are a fictional genetically engineered subspecies of humans in the science fiction television series Space: Above and Beyond. The name is etymologically derived from the Latin phrase "in vitro", which is used in science to refer to state of being in an artificial environment outside the living organism. Thus, In Vitro refers to the race not only being conceived in a laboratory, but also artificially gestated in glass and metal cylinders, to be "born" as young adults.

The In Vitroes were first farmed by the In Vitro Authority to fill the labor force gap after the population of Earth was decimated by a sterility-causing plague. Engineered with the best the genome has to offer, without the randomness of natural selection, In Vitroes are conceived from 'parents' that never actually lived as two human beings. They were composites of DNA from many sources thrown together in a petri dish to optimize the chances of getting the best traits possible. The race is a step up from cloning in that no two In Vitroes are alike; however they can share DNA with another In Vitro created from the same batch of constructed chromosomes, which would make two such individuals siblings. Genetically designed to be stronger, faster and less prone to illness, the In Vitroes were supposed to help bring the decaying human race back to its feet. They were created to be a servant caste, occupying jobs that were too dangerous, demeaning or strenuous for "Natural Born" humans. After they are born they serve a five-year period of indentured servitude to reimburse society for expenses associated with their creation.

After being created by gene splicing, In Vitroes gestate in artificial gestation chambers or tanks (from which the derogatory term "tank" derives), with the natural umbilical cord delivering the nutrients they need as they remain suspended in a sleep state and under an accelerated growth rate and an artificial cord at the base of their skulls (on the back of their necks) that is connected to a neural network that inputs basic education through direct sensory input to the brain. While floating in the neutral-buoyancy tank that is the artificial gestation chamber, a series of sophisticated retroviruses attack the genome of the In Vitroes, prematurely activating segments of DNA responsible for growth and maturity. By triggering these genes in a closely timed sequence while providing them with a steady flow of nutrient rich protein medium, their bodies are able to reach maturity at a rate far more rapid than naturally. After six years, their physical development is equivalent to a natural-born human at eighteen years of age. Only 27 percent of the subjects survive the gestation process. Unfortunately they are susceptible to severe drug use, specifically "green meanies", a painkiller in the form of green pills that InVitros find highly addictive.

During the AI War, Natural Born losses were greater than anticipated and the cost in human life was devastatingly high in the civilian population as well as in the military. Terrorist attacks claimed far too many. Combat and battle claimed even more. Every day the losses mounted. Humanity made the decision to increase its numbers artificially, not with the electronic intelligences that were now the enemy but with In Vitroes who could become highly skilled soldiers. Governments and industry worked together to build a multitude of In Vitro facilities around the world, facilities where these soldiers could be grown and trained.

After the In Vitroes were conscripted into the Armed Forces against their will, they proved to be poor soldiers. With no conventional families to protect, a lack of patriotic fervor toward nations that saw them as expendable slaves, and no vested interest in the A.I. War's outcome, the majority of the In Vitroes refused to fight. Out of guilt and dissatisfaction, the In Vitro platoons, an abysmal failure, were dissolved. The In Vitroes returned "home" without familial or community ties to guide their main-streaming and soon became a rebellious race of socio-political untouchables. The refusal to fight in the war against the Silicates has led to a stigma that continues to haunt In Vitroes everywhere, years after that particular war ended. Now, persecuted and reviled as disloyal cowards, most are outcasts, living on the outer edges of society. They have gained the reputation for being lazy and shiftless. Some Natural Borns even consider them expendable. The additional artificial "navel" present at the back of their necks (where the artificial umbilical cord/neural implant was attached in the gestation chamber) became the only visible distinguishing feature, making them easily recognizable and an easy target of constant discrimination.

Retrieved from "https://aliens.fandom.com/wiki/In_Vitro?oldid=164628"
Community content is available under CC-BY-SA unless otherwise noted.