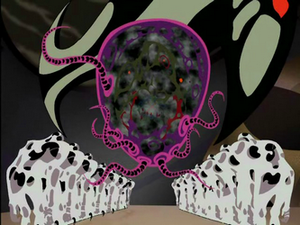 The Imperium were a civilization of space-faring, parasitic aliens who are apparently controlled by a single entity.

The Imperium are nocturnal, with direct exposure to sunlight killing them. They are capable of absorbing the forms and traits of other species. After an earlier conquest thousands of years ago on Mars, they possess the Martians' shapeshifting ability and telepathy.

According to J'onn J'onzz, the Imperium first entered the Sol System roughly 1,000 Earth years ago. Their first victims were the Martians, who they rendered extinct. A small Martian resistance movement used a nerve gas to paralyze the Imperium about 500 years later, but J'onn was the sole survivor of the last raid. After two Earth astronauts discovered the stasis chambers imprisoning them, the Imperium were freed and set their sights on Earth. They infiltrated the highest ranking positions pushing reforms to disarm the world's nuclear weaponry, leaving the planet open to attack.

As a beachhead, they installed factories to pump out an ionized gas to cover the Earth in eternal darkness for their troops to mobilize. A group of Earth heroes united to stop the invasion, but were captured. The Imperium leader personally came to Earth to kill J'onn to fully eradicate the Martians. Unbeknownst to the heroes and the Imperium, Batman sabotaged the ion chamber to bring back sunlight, killing off its invasion force. The Imperium flagship then retreated, leaving a few of their soldiers to die on Earth.

Retrieved from "https://aliens.fandom.com/wiki/Imperium?oldid=185141"
Community content is available under CC-BY-SA unless otherwise noted.