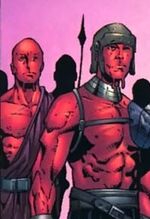 The Imperials are the red-skinned peoples native to Sakaar.

The imperials are a species of red-skinned humanoids of roughly human-height and strength. They have black or red hair (although the majority of males seem to be bald) and tendril-like protrusions emanating from the chins of the males. They are divided amongst two genders, male and female, they in this regard seem mostly identical to human beings. They have red blood and do not have any particular abilities of note, save for the rare Imperial Primes.

Imperial Primes are rare male imperials born with exceptional physical abilities. They seem to vary in many ways from the standard imperial man, they have a bony ridge, extreme strength, and all-yellow eyes, and they seem to reach physical maturity within 10 years (although there is lack of information for a standard imperials growth-rate). It is said there is very few of these special people born each generation, the only two known primes were Angmo and Axeman bone. The empire seemingly outlawed the existence of the primes, these special children mostly being killed at birth with its head being sent to the emperor.

The culture of the red-skinned Sakaaran peoples seems highly divided, with culture varying between regions. It seems that amongst the most modern imperial societies those with darker-hued skin and more tendrils are deemed socially superior to those Imperials with lighter skin and fewer tendrils because of the believe that they are further along in the evolutionary process.

Typically referred to the empire, they are a very hostile nation. It claims all that goes through the Great Portal and thus has a high alien population. This culture seems very centered around gladiatorial combat, and hedonism, this is obvious with their "pleasure cruisers" which rich Imperials travel upon.

The northern most Imperial civilization, the Independent Province of Fillia is the only other Imperial nation apart from the empire. It was also the first Imperial nation founded on Sakaar. Being founded by warlords it is not exactly surprising that savagery seems to be ingrained in Fillian culture, cannibalism seems to be common and mundane. It seems that the Fillians have long worshiped gigantic dragons as gods, which differentiate them from most peoples on Sakaar who all seem to follow the ways of "The Prophet" and the "Saka Priests".

Although it is known that the Shadow People arrived on Sakaar from another planet millennia ago, there are conflicting stories concerning the origins of the imperials. The leading theory amongst imperial scientists is that the race evolved from a single tribe of Shadow People who abandoned their traditional way of life in Sakaar's mountains and deserts and live among the Great Deserts more temperate eastern border.

After a few millennia, this wayward tribe became increasingly isolated from the rest of civilization, and began to develop different physical characteristics than other Shadow People, including smaller, less muscular bodies; crimson-hued skin; and tendril-like protrusions emanating from the chins of male.

The Empire does not officially recognize this theory of evolution, however, because it feels that the Imperial race and, in particular, the royal bloodline of the Emperor, are unique and superior to the Shadow People or any other group on the planet. According to the Empire's scientists and historians, the Imperials share no common ancestry with the Shadow People whatsoever. Rather, the Empire's scientists speculate that the Imperials are a distinct race who arrived on Sakaar from off-planet on their own accord years after the shadow people first set foot on the planet.

Despite ongoing debate, what is for certain is that the first recorded appearance of an Imperial occurred in the year 1713 Pre along the outskirts of the Great Desert. No longer able to withstand the extreme temperatures of the Great Desert and the Shadow Mountains, the Imperials gradually began migrating eastward into the plains and fertile river valleys west of the Maga Mountains. These early imperials were nomadic hunters and gatherers, never settling in one location and constantly following the movements of the massive trizelle herds that populated the region.

It was not until the year 1150 Pre that the imperials learned agricultural techniques from the Native hives, who had been farming their own land for nearly 1,000 years. No longer dependent on following the trizelle herds for food, the Imperials began settling in small city-states along the vandro river. Assignment of the highly coveted leadership roles in these fledgling imperial societies was determined through a series of gladiator matches, with the last man standing appointed the city-states "Prime Lord."

The most crucial date in the modern-day Imperial calendar system coincides with the birth of the earliest known member of the royal bloodline in the year 0. Born in the ancient Imperial city-state of Andav along the Vandro River, this earliest known royal ancestor led a failed coup against Andav's Prime Lord at age 23. His grab for power thwarted, he and his followers were forced to flee Andav to avoid execution and travel southward where they founded the city-state of umegas west of the Torkaw River later that year.

As these agricultural city-states flourished, the Imperial population on Sakaar grew exponentially. Due to overcrowding an social unrest in the established Imperial city-states many imperial warrior-clans began migrating into the north and further east in search of new land to colonize, leading to hostile competition between Imperials and Natives over land and natural resources as the imperials began outnumbering the Natives, who had dominated the planet up until this point in history.

As the imperials slowly rose to dominance, an alliance of powerful imperial warlords joined forces to consolidate power power north of Chaleen Plains in 133 Post, establishing Fillia, the first known imperial kingdom. In the decades that followed similar Imperial kingdoms were established in Okini, Tego, Vandro, Umegus, Wukar, and Kuma. In these new kingdoms leadership was no longer determined through gladiatorial combat; rather, leadership was passed down through familial bloodlines. But the gladiator battles, or the "Great Games" as they had come to be known, remained a central form of entertainment in imperial society, with retired soldiers, unemployed youths, and convicted criminals hoping for pardon now competing as gladiators for sport.

In the year 181 Post, silver squares were established as the primary form of currency throughout many of the imperial kingdoms, and the discovery of large silver deposits in the northwest region of the Maga Mountains led to the Kingdom of Vandro's political and military dominance for centuries.

With the rise of a wealthy and educated Imperial noble class, the kingdoms of Umegus and Vandro began operating as parliamentary systems, their kings reduced to mere figureheads and senators taking over duties of governance. Although the practice of succession through familial bloodlines was formally abolished at this time, in reality, the same rich, land-owning families still retained the political power over the generations while the poor masses experienced little to no upward social mobility.

After years of minor border skirmishes between the Imperial kingdoms, full scale wars broke out among the various kingdoms in 199 Post as they competed for land and resources, leading to what today is known as the "Dark Ages" of imperial history. With the kingdoms of Vandro and Fillia maintaining their dominance throughout this period, the Dark Ages were characterized by bloody invasions and political assassinations. This instability lasted for hundreds of years until the rise of Angmo in 486 Post, a noble army general from Umegus who led a brilliant yet bloody military campaign across Sakaar, annexing all other territories into umegus. When his march of conquest was finally completed in 500 post, Angmo named his new political entity the "First Sakaarian Empire" and named himself as its "Father Emperor."

The era of peace under the Father Emperor's reign was short-lived however. Voracious, amorphous alien invaders known as the Spikes attacked sakaar in 504 Post, starting a 36 year war that stretched Imperical civilization to its limits. Although a Spike victory seemed imminent for many years, in the end, the Father Emperor prevailed over the spikes and relocated the capital of the empire to the newly constructed Crown City in 542 Post. To commemorate his epic defeat of the Spikes the Father Emperor reinstated the Great Games, which had been suspended for many years during the Spike War. Upon the Father emperor's death as a result of a hunting accident in 552 Post, his son, Sakaar's Hero Protector, assumed the throne, becoming the "Red King." In 560 Post, he declared a war against the Fillians, who he claimed were responsible for shooting down a Pleasure Cruiser and killing all on board.

The "Red King" would then be challenged by a faction of rogue gladiators and slaves who broke free from their obedience discs after a Great Games competition at the Great Arena and fled the Crown City. Although many commentators were fearful that these escapees would join forces with the Fillian Rebels, although ultimately they did not.

This band was led by the "Hulk" and his warbound, and eventually they would succeed in overthrowing the emperor, and putting hulk on the throne. Unfortunately a damaged warp-core within the ship the Hulk arrived on the planet in detonated destroying the crown city, thinking the world would die the hulk and the refugees from the city fled Sakaar. The empire collapsed the world fell into utter ruin and chaos.

After Sakaar was destroyed by Galactus the only remaining populations of the Imperials could be found on two planets, earth in what is known as the "Savage Lands" and the planet "K'ai" although their numbers are not known, the imperials should be considered critically endangered.

Retrieved from "https://aliens.fandom.com/wiki/Imperials?oldid=173273"
Community content is available under CC-BY-SA unless otherwise noted.