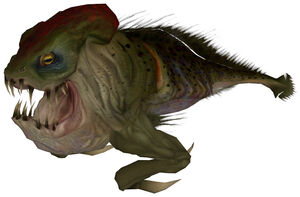 Ichthyosaurs are large fish-like life forms indigenous to Xen. They are extremely dangerous, and should be handled with caution, especially by those lacking HEV Hazard Suits. While they may appear docile at first, they quickly will become aggressive, especially if actions are taken against them.

There is significant evidence to support the theory that Ichthyosaurs may in fact breathe oxygen, and can survive on land for short periods of time before perishing. They also share their names with an ancient Earth reptilian group, also known as the Ichthyosaurs.

The skeletal diagram of an Ichthyosaur
Add a photo to this gallery
Retrieved from "https://aliens.fandom.com/wiki/Ichthyosaur_(Half-Life)?oldid=164190"
Community content is available under CC-BY-SA unless otherwise noted.