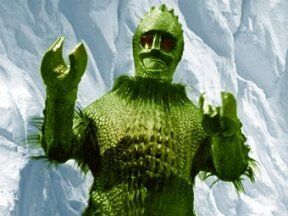 Brian Hayles
Ice Warriors are a race of Martian humanoids which evolved several thousand years before mankind. The majority of their civilization has left their homeworld en masse at some point, due to Mars' climatic changes rendering it increasingly less habitable.

Ice Warriors are reptilian humanoids, though their scaly skin is usually hidden under scale-like armour. They are taller than average humans, often around 7 feet in height. Clamp-like hands are present, often mounting sonic weaponry. It is rare for an Ice Warrior to remove his or her helmet; however, underneath it they have flattened, reptilian faces, with long tongues and deep red eyes. The lifetime of an Ice Warrior is long, apparently about 300 standard years. Females are of a slighter build, and have a dorsal crest (presumably to attract males).

As they come from a cold environment, extreme heat is particularly dangerous to them. Due to the different gravity, pressure and atmosphere on Earth, they move more slowly and their voice is more of a strained hiss while in Earth-like areas.

They also possess immense strength, as Grand Marshal Skaldak (outside of his suit) was able to easily overpower and dismember several humans, whilst trying to escape a damaged and submerged submarine.

Ice Warriors were raised to display a strong sense of personal honour. As an example, after the Third Doctor saved the life of the Ice Lord Izlyr, he felt obliged by duty to help the Doctor escape. Ice Warriors also had a strong dislike for lying, though they would do so in serious situations. They also believed that a victim of murder would not rest in peace until their killer had atoned for the crime. During the ritual blood duels, Ice Warriors often spat at their opponent's face in the challenge. Terrorism was considered anathema, and Ice Warriors typically would not resort to such attacks.

The strict code of honour descended from the time of the early Martians before they became a warrior species and their planet began dying. At that time, they only hunted for food but did not fight one another nor did they experience warfare. In fact, the word "warrior" was unrecognised in that era and instead their belief in honour meant that they operated under a "gift economy"; this was a system where people did not pay for things but instead were given freely with the receiver giving something in return (bartering). In these early years, the Martians were more involved in the arts and the crafts rather than with military affairs. In time they began to slowly change after the disastrous climatic changes and the deaths they suffered, but were always considered a reasonable people. They were also a heedlessly proud people who refused to admit to the presence of an issue, even if it was of great severity.

Retrieved from "https://aliens.fandom.com/wiki/Ice_Warrior?oldid=196979"
Community content is available under CC-BY-SA unless otherwise noted.