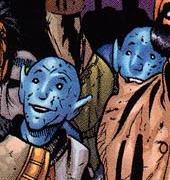 CrossGen Universe
The Ice Gnomes are a race that inhabit the frozen land of Skarnhime on the planet Quin.

The Ice Gnomes are a blue skinned humanoid race with pointed ears.

The Ice Gnomes were one of many races that joined the uprising against Mordath alongside the stranger Ayden. After the hero killed Mordath, the Ice Gnomes and may of the races' representative insisted he become king, however the old man decline to live a life of solitude.

Three hundred years later, Mordath was resurrected by Solusandra gifting him a Sigil. Using his newfound power, he re-assumed his path of conquest, conquering the Five Lands.

Retrieved from "https://aliens.fandom.com/wiki/Ice_Gnome?oldid=172965"
Community content is available under CC-BY-SA unless otherwise noted.