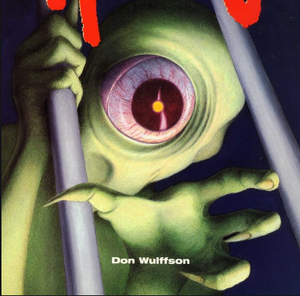 Aliens: Extraterrestrial Tales of Terror
The Icarians are a semi-sapient race from an unknown planet.

A plain-looking being resembling a faceless, featureless boy. While it has no facial features it has a single huge ectoplasmic eye on its semi-transparent face. It is regarded as one of the hardest creatures to capture as they have an uncanny ability to elude capture. These creatures have an extremely high IQ and a chameleonic ability that allows it to change its skin color and appearance. Additionally these aliens are said to have a natural built-in sonar system.

In 2103 an Icarian was captured and brought to the New Species section. The guide at the zoo explained to visitors that the reasons for its successful capture were most likely due to its age. The Icarian took an interest in a young boy who insulted its appearance. It later shapeshifted as the boy and managed to escape captivity fooling its handlers. Once free it punished the boy by killing his aunt taking her appearance. Once the police informed the family, the creature vanished to begin a reign of terror on the planet, changing its appearance and causing chaos and distrust. It managed to take the appearance of the President of the United States and cause a nuclear holocaust. Later it tracked the same boy who laughed at it coming to him in the guise of his dead sister.

Retrieved from "https://aliens.fandom.com/wiki/Icarian?oldid=182696"
Community content is available under CC-BY-SA unless otherwise noted.