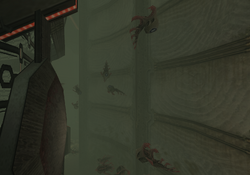 Metroid
Hydlings are a species of small, pack-oriented aquatic organisms which swarm together to remain safe, indicating that they are a base organism near the very bottom of the macroscopic part of the food web. Despite this they are fierce predators in a similar manner to the piranha of planet Earth. Their teeth can pierce metal, although clever sapients such as galactic bounty hunters have nothing to worry about so long as they wear strong enough body armor. They are indigenous to both the upper and lower regions of the Torvus Bog.