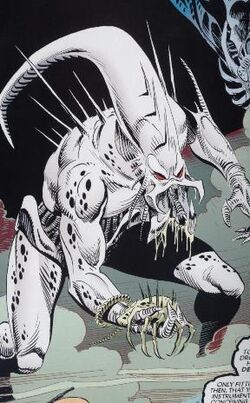 White Hybrids, the deadliest of the species.

Alien vs Predator
The Hybrids are a race of aliens created by a corrupted computer system called TOY on board the Liberté. The Hybrids possess the traits of Xenomorphs, Predators and Humans.

Like Xenomorphs, they are an eusocial species with acidic blood. Like Humans and Predators they are an intelligent species capable of speech and the usage of tools such as firearms. Their method of reproduction is similar to that of the Xenomorphs, using facehuggers to impregnate hosts (even Xenomorphs).

The King caste seems to be the largest of the White Hybrids. Not much is known about how the Kings function, but they seem to be the leaders of the species. There was only one known King and he was killed by a Xenomorph Queen Mother.

The Drones seem to make up the bulk of the White Hybrids. They are smaller than the King, but seemingly no less intelligent.

No Queen members of this species have been seen, but the Hybrid King did intend to impregnate a number of people with Queen embryos.

On board the skyliner, the White Hybrids are engaged by Caryn Delacroix, the female Predator 'Big Mama', a group of mercenaries trained in the ways of the Predator and an Alien Queen Mother (allied to the group due to Caryn carrying her last offspring - a royal chestburster).

The group wipes out most of the Hybrids, but are captured (with the exception of Caryn, who apparently dies after the chestburster erupts from her). The Hybrid King plans to use each of the group (including the Alien Queen Mother) as hosts for White Hybrid Queens to replace the killed warriors. However, the group is aided by the alien that came from Caryn - which is also a White Hybrid, but more closely resembles a Xenomorph - who battles the Hybrid King. As the group begins to escape during the battle, the Queen Mother (which has been impregnated with a White Hybrid chestburster) kills the Hybrid King by grabbing him right before the chestburster emerges, causing it to burst through the King as well and kill them both. The Chestbuster is subsequently killed by Big Mama. The White Xenomorph that aided the group leaves with Ash Parnell (formerly Caryn Delacroix) and Big Mama while the rest of the White Hybrids are destroyed with the Skyliner.