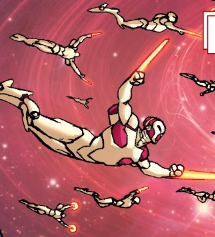 The Hybrids are an alien species of symbiotes.

The Hybrid seem to have some history with the Civilization, and on occasion engaged in to military conflicts. Currently the Hybrid are focused on fighting off incursions by the True People and the Split Second Men.

In the comics they appear to be a militaristic species. As a people they believe in the binary relationship of host and biosyte. The Hybrid also appear to worship entities known as the Seventeen Gods.

Retrieved from "https://aliens.fandom.com/wiki/Hybrid_(Soldier_Zero)?oldid=181789"
Community content is available under CC-BY-SA unless otherwise noted.