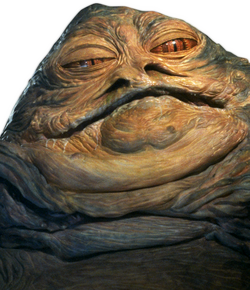 Star Wars
The Hutts are a large sapient species which originated on planet Varl, but later migrated to Nal Hutta.

Before the Galactic Republic Hutt came to be on the world Varl. During some point in time Varl became part of the Infinite Empire of the Rakata.

In about 24,000 BBY the Hutts made an empire in the Outer Rim Territories. Xim the Despot found the empire 100 years after it was established and after failed negotiations attacked. The Hutts won the war with the loss of their homeworld Varl.

In around 15,000 BBY a horrid civil war tore the Hutt Empire. Some Hutt homeworlds were turn into wastelands. Soon after the war Hutts stop being warriors and embrace the philosophy of kajidic.

Hutts After the Cataclysms[]

Hutts adopted a mindset of deceit. They soon became a race of criminals (except for a few exceptions). Around 4,000 BBY they became competitors with the Exchange. For a short time Nar Shaddaa (a Hutt planet) was taken over by the Exchange.

Fall of the Republic and Rise of the Empire[]

In 21 BBY the son of Jabba the Hutt whose name was Rotta was kidnapped by the Confederacy of Interdependent Systems and was saved by Anakin Skywalker and his padawan Ashoka Tano. This led to Jabba to letting Republic ships go in his space lanes. This caused a major advantage for the Republic in the Clone Wars.

Under the rule of the Galactic Empire the Hutts thrived. Most Hutts also remained neutral in the Galactic Civil War between the Rebellion and the Empire.

After the Battle of Endor the Hutts stayed on top of the criminal underworld. But in 25 ABY when the Yuuzhan Vong invaded the galaxy, the Hutts sided with the Vong to make sure they would not be attacked.

Much later during the time of Darth Krayt's rule the Hutts sided with the Empire.

The Hutts are a slug-like invertebrate species. They are hermaphroditic, meaning each individual is male and female anatomically, but due to their communications with other species, many Hutts develop traits associated with a specific gender. Jabba the Hutt is referred to by male pronouns, and Gardulla by female ones. The Hutts are often crime lords, with the most well known of the species, Jabba being a crime lord on Tatooine. Hutts are known to keep slaves from other species.