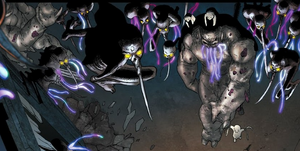 Huskers are zombiefied humans converted by the Edda. After a human has been farmed and depleted of all emotions that could be used to feed the aliens, the Edda turn them in these creatures. These creatures are used to hunt down the remaining human populace which are brought to the Edda farms. They appear as grey naked creatures with a long trunk or translucent tentacles emerging at the mouth.

Retrieved from "https://aliens.fandom.com/wiki/Husker?oldid=189530"
Community content is available under CC-BY-SA unless otherwise noted.