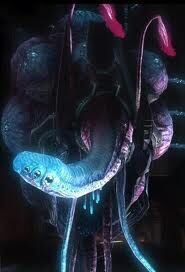 Huragok, also known as Engineers and Savants, are the only known non-combative race amongst the Covenant forces. They were artificially created by the Forerunners. They are a peaceful race, and frowned upon the Human-Covenant war. They are silent beings, and speak in a form of sign language which very few species can understand (apart from the Unggoy and themselves). Huragok are incredibly intelligent and are very good mechanics. The Yanme'e were replaced from the usual duties as engineers by the Huragok and placed in the military upon the latter's induction into the Covenant armada. This sparked some conflict between the Yanme'e and the Huragok. One Huragok, ironically named "Lighter Than Some", was a victim of this aggression. As a peace treaty to the Humans, he also made the Brute Chopper. It was later used by the Jiralhanae as a weapon. Their "voices" are made up of small clicks in the air sack of the Huragok.

It is unknown how the Huragok were absorbed into the Covenant, but it can be presumed that their DNA was stolen from Forerunner computers and artifacts. They are, as already stated, carbon-based artificial lifeforms which only manage to scratch sapience. It has been speculated by the terminals discovered by The Master Chief upon Installation 00 that they were never meant to be sapient, and are in fact referred to by the Didact as "a useless waste of good carbon". This may indicate that they have gained sapience quite recently.

Uses in the Covenant[]

The Huragok have been seen in Halo 3: ODST, Halo: Reach and Halo Wars, where they are nicknamed "Engineers". Because of their few appearances, not much is known about the physiology, apart from the fact their tentacles can split into millions of cilia at a time to make a "beam" which can repair nearly any technology in a matter of seconds.

Furthermore, it is known how they can fly, or "float", from one place to another. The process is caused by a massive gas sack on the back of the Huragok which breaks down hydrocarbons (mainly methane) and other hydrogen-rich chemicals to cause the Huragok to literally become lighter than air. Additionally, the Huragoks can control where they move by six tentacles which are also filled with gas.

The Huragoks, as mentioned above, are first seen in Halo Wars, where they feature as a non-combatant support unit. They appear again in a similar role in Halo 3: ODST. The only way to actually come in contact with a Huragok in the previous first-person shooters is to modify the game or download Halo: Combat Evolved, in which you can make your own levels and choose the Huragok (though named the "MegaFloatyThing" in the game) and actually place it on a level. However, since the Huragoks have no death animation or attacking animation, they will not die if you shoot them but will only emit a small clicking sound and use a wound animation where you shot them.