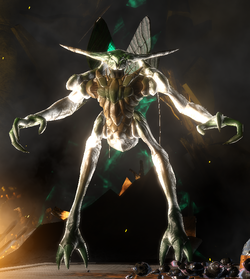 Star Trek
The Hur'q, also known as Burrowers are a race of insectoid lifeforms from the Gamma Quadrant. They are a highly advanced species, which was nearly subjegated by the Dominion centuries prior. They were believed to have been extinct until the early decade of the 25th century.

Hur'q are germanium-based insectoids, which had evolved on the world known as Havas-Kul, located within the Gamma Quadrant. They vary in size, ranging from human height, to a height double that size. They are very strong by themselves and don't utilize weapons in combat. They possess small wings, which despite the size of the creature, allow for lift for an unknown amount of time. They possess senses similar to the sharks of Earth, capable of detecting magnetic fields and are known to dislike environments with no gravity.

They are known to hibernate for centuries, capable of learning during this period and awakening well over 1000 years more well knowledgeable. Their hibernation is due to the eccentric atmosphere of their world, as well as the bombardment of dangerous radiation. The fungal of their world is able to withstanding the radiation and it's believed the fungus itself is the source of food for the species. While in this hibernation cycle, the Attendants, also known as the Drantzuli, are known to care for them.

They are capable of cognitive functions, however the only real way for this to happen, they would need to be exposed to the drug known as Ketracel White, which was used by the Dominion's Jem'Hadar. Without it however, they are driven mad, as well as aggressive towards virtually any race they encounter. They are able to learn languages such as English.

Despite the normal Hur'q, possibly the most unique of all the species is the only living inhabitance of Havas-Kul. This Hur'q is the only living member of their home planet as of the year 2410 and has been mutated to a significant degree. It's unknown how this mutation occurred, however it is possible that it was exposed to extensive radiation which bombarded the planet's surface. As a result, it's genome was mutated, making it a much more dangerous variant. The mutated hur'q is very strong, capable of taking damage far better than that of its regular kin, as well as dishing out some serious injury to those invading it's home.

Aside from it's improved physiological aspects, the mutated creature also possesses the ability to naturally cloak itself. It's likely a form of adaptive camouflage, allowing it to appear and disappear at will and it's further enhanced when under the cloak of darkness. The mutated individual is also the only known being to successfully kill a Founder without the aid of weapons and live.

Attendants, otherwise known as the Drantzuli to the Tzenkethi, evolved on Havas-Kul, like the Hur'q, making them a germanium-based insectoid. They serve the Hur'q, mostly in the form of caring for them and their technology while the Hur'q themselves hibernate. It is believed that the Attendants also hibernate, but awaken much earlier than their masters, as a way of preparing for their return.

They are a significantly large insectoid, roughly the size of a large breed of dog. It possesses 4 legs, with 2 long arms, with a claw at the ends. When encountering other species, they are vicious and normally attack in swarms, overpowering their foes, similarly to how the Chidyat Swarmer acts. When in hibernation, they are cocooned in crystal-like chrysalis, which is composed of pure germanium. They don't possess any visible eyes, which would make others believe that they too possess the ability to detect magnetic fields like their masters.

The Hur'q are known to have technology, made up of electromagnetic manipulation of crystals, morphogenic in nature. Everything from the doors and even their computer systems are composed of these materials.

The Hur'q are known to possess both small and large vessels.

Retrieved from "https://aliens.fandom.com/wiki/Hur%27q?oldid=180731"
Community content is available under CC-BY-SA unless otherwise noted.