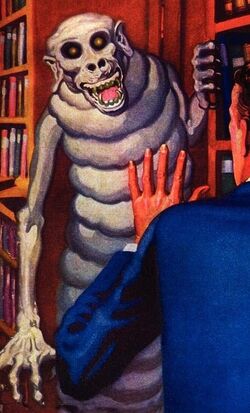 "Hunters from Beyond" is the name coined by Cyprian Sincaul to refer to a species of interdimensional predators.

Physically, the Hunters are terrifying creatures, with a bipedal but forward-slouching posture and grey hairless skin marked with "faint, etiolated rings" that are reminiscent of a cave-dwelling serpent. This skin is also shriveled and described as being akin to parchment. Their heads are ape-like, but have almost canine-like jaws and slime-dripping fangs. The eye sockets are incredibly deep, and the eyes themselves are slit-shaped and brightly luminous, glowing with a yellow phosphorescence. Their long arms end in "twisted hands", equipped with menacing black talons, similar to the claws of a hyena. They move around in a strange manner, as if changing positions instantaneously, rather than fluidly; and emit a foul putrefying odor. They've been observed to hunt both alone and in packs.

These creatures originate from another realm that is usually unreachable by Human senses. While they can open up gates to Earth and appear before Humans, they can't actually interact with material things for the most part, although they do leave behind the putrefying smell and the characteristic gray-green slime that drips from their mouths. However, their most notable trait is their ability to exert a mesmerizing effect that compels victims to follow them through the gates and enter the Hunters' dimension, and which requires conscious effort to be resisted. When they do manage to entrance a Human victim, the Hunters will feed, but not in the same way a carnivorous predator would. Their sharp talons and fangs are not meant to maul victims, but merely to intimidate them, as the Hunters don't feed on the flesh, but rather on the minds of their prey. After they've fed, the victim is returned to the Human world in a living but non-responsive state, with their minds and memories completely erased.

Although they've been compared to hellish beasts, it's not clear whether the Hunters are truly supernatural or just alien, but the sculptor Cyprian Sincaul somehow learned how to summon them without the need of any magical ritual or incantation, as if by sheer willpower.

Retrieved from "https://aliens.fandom.com/wiki/Hunter_from_Beyond?oldid=184922"
Community content is available under CC-BY-SA unless otherwise noted.