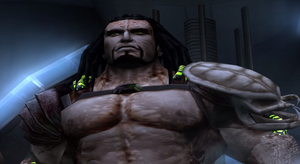 David Sobolov
Hunter Borgia is the son of Bruno and Isabella Borgia, and would rise up to forge a business empire with his mother and daughter, based on Yautja technology.

Hunter was born in New Way City in June 1930, during one of the hottest summers on record. His father, Bruno Borgia, had become the self proclaimed 'God of Gangsters' while his mother Isabella was being looked after in the New Way church by Bruno's men. Not long after Isabella had given birth to Hunter - whom she already realised was ill and wouldn't survive - the Predator known as Scarface appeared with the severed head of Bruno - having killed him in a fight in the museum next door. When Scarface hesitated upon seeing Isabella pull out a gun, she shot him in the eye - splattering his alien blood on herself and Hunter, while the sound of Hunter's crying got the attention of Bruno's men. Their firing caused Scarface to flee, leaving behind some of his equipment. As the men checked on Isabella and her son, Scarface's blood already began to genetically affect them.

When Scarface's failure caused him to set his ship's self destruction, Isabella and Hunter narrowly survived thanks to the fortified museum. After gathering the few survivors of the incident, Isabella became a leader among the citizens with her and Hunter helping them to rebuild New Way City - later renamed Neonopolis: City of Light.

Thank's to the Yautja's blood, Hunter became bigger and stronger, with him and his mother becoming business tycoons and furthered the dynasty Bruno had begun by creating Borgia Industries - selling reverse-engineered Predator technology they called 'Prometheus' tech - which was used for a variety of purposes including weapons, weather control, jamming equipment, stealth, etc. Selling Prometheus tech to Neonopolis' various gangs as well as using their weather control devices to keep the summer at sweltering heats, Borgia Industries was able to successfully lure Yautja to Neonopolis for them to hunt and capture - taking their weapons and using the Predators for genetic experiments. At some point in his life, Hunter had a daughter whom he named Lucretia while building a tank for his aging mother Isabella, which linked her to every computer system in Neonopolis - giving Isabella full control of the city and with her computer form been named 'MOTHER'.

When his daughter was old enough, Hunter began leaving more management to her while he traveled the world, hunting big game and searching for signs or stories of other Predator visits. Among his travels, he managed to somehow acquire Xenomorphs - which he gave as a gift to Isabella. Borgia Industries continued to thrive in any way it could, but also committed more atrocious acts. This included kidnapping citizens and subjecting them to cyborg enhancement; the successes were made into new members of the Monster Squad, while the failures were sent to become hosts for the Xenomorphs. Thanks to advances in genetics and cybernetics, Hunter stayed young even as he neared his 100th birthday. Fascinated by the Predators, however, he began to spend a lot of time in an isolation tank - trying to find a way to successfully fuse Human and Predator DNA.

A threat came in the year 2030, however, in the form of Scarface - returning to Earth to atone for his past errors. After getting the attention of the family with the decimation of the city's warring gangs, killing a group of Borgia mercenaries called the Machine Men, destroying a Borgia weapon's shipment and later bringing down a Borgia weapon's depot, Hunter dispatched several waves of Borgia Industries 'Monster Squad' to deal with Scarface. Despite Scarface's valiant efforts in taking down the first wave, the numerous waves of Monster Squads managed to subdue him, with Hunter standing over him before accompanying the Borgia scientists as they took the defeated and bloodied Predator to the labs. Hunter then returned to continue his experiments - believing the threat to be over and beginning his final experiment on himself.

When Scarface escaped and defeated all before him - including killing Isabella and her Xenomorphs - Lucretia fled to the isolation tank where Hunter was. Aborting the process to try and get help from her father, Hunter emerged as a Human/Yautja hybrid, with the skull of a Yautja on his shoulder and with stolen 'Dark Blade' clan technology including wristblades, a combistick and smart disc. He also was equipped with Predator cloaking technology that would hide him from neural and thermal scans. In his aggravated state, Hunter critically wounded Lucretia before Scarface appeared - the two engaging in a brawl. Hunter initially held the edge, but fled when Scarface was aided by Lucretia's Ronin bodyguards - jumping through a window and fleeing onto the roof.

Scarface's scans of Hunter's new form revealed that his muscles, skin and eyes had been genetically enhanced. His enhanced muscles, combined with a hyperalloy skeleton gave him supreme mobility and strength. His enhanced eyes gave him thermographic vision while his enhanced skin acted like body armour - making him much more durable. However, his scans also showed Hunter having psychotic brainwave patterns and detected severe neural degradation.

Hunter's enhancements shone through, as despite their best efforts, the Ronin trio fell in combat with him - with Scarface left alone to battle him. However, Hunter was being worn down slowly by Scarface, with him soon jumping onto the statue of his father Bruno - possibly in the hope of luring Scarface to his death.

However, Hunter's plan's failed as Scarface defeated him. Rubbing salt into the wound, Scarface then played Isabella's earlier message that Hunter was a 'stunted weakling' without [Scarface's] blood. Hunter was then killed by Scarface, who took his head and left his decapitated body on top of the statue - painting his clan's mark on the face of Bruno using Hunter's artificial Predator blood before leaving Earth with his honor restored.

Following Hunter's death and the near-death of Lucretia, Weyland Industries bought out Borgia and brought an end to the dynasty Bruno began 100 years ago. Lucretia became the new MOTHER computer.

Hunter was said to have been friends with Charles Bishop Weyland, before he disappeared in Antarctica in 2004.

Hunter is notable for being the first Human-Yautja hybrid known to history - having become one by artificial means.

After Hunter's death at the hands of Scarface and the fall of the Borgia Dynasty, Weyland Industries bought out Borgia Industries before talking about a merger with the Yutani Corporation.

Because of the Yautja blood he vampirised, Hunter could live on without dying of old age. He was chronologically 100 years old by the year 2030. Although he was that old, the blood allowed him to retain his youthful look.

Retrieved from "https://aliens.fandom.com/wiki/Hunter_Borgia?oldid=195030"
Community content is available under CC-BY-SA unless otherwise noted.