"Beware the beast Man, for he is the Devil's pawn. Alone among God's primates, he kills for sport, or lust or greed. Yea, he will murder his brother to possess his brother's land. Let him not breed in great numbers, for he will make a desert of his home and yours."
―Cornelius, Planet of the Apes 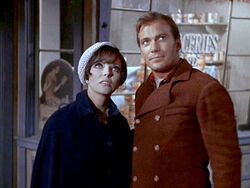 Real
Humans (Homo sapiens) are a species of sapient bipedal great apes native to planet Earth. They are omnivorous and generally believed to have descended from arboreal ancestors.

Humans have an erect posture, with two legs, two arms and a head which comprises the brain and most of the sense organs. Extraterrestrial species showing this same body plan, or a very similar one, are collectively known as humanoids. Although some humanoid races look almost exactly like humans (due to convergent evolution or another unknown factor), as is the case with Vulcans, they are often very different internally. Vulcans, for example, have green blood containing copper, while the Human blood is red and contains iron.

Humans are carbon-based lifeforms, and have an internal skeleton containing calcium phosphate, which gives the bones strength and durability. More than 60% of the Human body is composed of liquid water. Their circulatory system is closed and they have a heart and two lungs (though they are able to survive with only one lung), located in the chest area.

Humans have two pairs of limbs, the lower pair adapted for bipedal walking (legs) and the upper for carrying (arms).

Human arms end in hands. Hand are intricate arrangements of five miniature limbs that can be used as grapples, tweezers, clusters of feelers, baskets or semaphore machines. (Aliens unfamiliar with humanoid hands often mistake human hands for symbiotic lifeforms on first contact: hands appear to have four limbs and a head, like the main body of the human; the hands operate machinery and perform all the recognizably intelligent actions, and the hands attempt to communicate in some sort of interpretive dance.)

Humans balance vertically on their legs, and Human knees bend backwards. Human feet evolved from a second pair of hands, which can bear the Human's weight, but cannot perform any of the actions of the true hands. However, Humans have also developed sufficiently to perform tasks using their feet as a matter of choice and need in place of the hands where absent.

Despite having evolved as an opportunistic feeder species (being able to gather, hunt, scavenge, or raise food), Humans are generally considered weak and not well adapted to hunt without the aid of tools. Their canine teeth, for example, are not sharp like those of their evolutionary relatives, the other Earth primates, and their fingers and toes have nails, rather than claws. They can, however throw objects with unusual strength and accuracy, and an athletic Human is a tireless runner. A Human following you with a rock is extremely dangerous.

Humanity's greatest strength is their endurance. Being pursuit predators by nature, Humans have several adaptations for such a lifestyle, such as sweat glands, and being mostly bare of hair. Even when compared to other Terran pursuit predators like wolves, a Human's endurance is massive. With this endurance comes hardiness. Injuries such as broken limbs or large lacerations are often death sentences for other species, while Humans often live several years after receiving similar injuries, although thanks to their hyperactive scar tissue, they are left with nasty scars. In hybrids with other sapient species, this adaptability lessens or completely removes any inherited weaknesses.

Human civilizations have been featured in various ways in an extraordinarily large number of works.

In science fiction and fantasy settings, Humans may be portrayed as anything from a planetary civilization to an interplanetary, interstellar or even intergalactic one, whether merely a part of a multi-species state, at the helm of a great empire, or subjugated by another species. Sometimes, Humans are portrayed as being extinct, endangered, regressed, or evolved to higher forms. On other occasions, Humans are given a homeworld other than Earth, such as Sera in Gears of War or Coruscant in Star Wars, or Earth is portrayed very differently from the real world. Works leaning more towards fantasy often give Humans inherent access to abilities not present in real life, such as the Force in Star Wars, or magic and/or psychic abilities in a great number of other works.

Humans in science fiction may also be known as Earthlings, Terrans, Tellurians, or many other names. The Real People from Joan D. Vinge's "The Crystal Ship" refer to Humans as the "Star People"; whereas the Traags from Fantastic Planet call them "Oms", and regard them as little more than pests. In the Sector General universe, every sapient species calls itself "human" in its native tongue, thus requiring the descriptor "Earth-Human", or using the physiological classification for humanoids in general: "DBDG".

Some works of fiction have portrayed Humans as descendants of some extraterrestrial species that once settled on Earth, e.g.: the Pak Protectors in Known Space or the Golgafrinchans in The Hitchhiker's Guide to the Galaxy; or as the product of artificial experimentation on Earth's lifeforms, either intentional or unintentional, such as that which was conducted by the Silurians in Doctor Who, or by the Elder Things in H. P. Lovecraft's "Cthulhu Mythos". In the Space Odyssey series, Humans achieved sapience under the influence of an alien Monolith.

Additionally, the social and technological development of Humans in fiction may have been influenced or guided by alien interference, e.g.: the Vorlons from Babylon 5; a Salaxalan pilot from Dirk Gently's Holistic Detective Agency; or the Silents from Doctor Who.

Conversely, Humans themselves are generally regarded as the ancestors of a large number of species and are often capable of interbreeding with many as well.

Human-alien relations in science fiction depend on the creator. Humans can be portrayed as friendly and accepting of other lifeforms, or as xenophobic and imperialist. Starting in the past, an extremely common trend in science fiction is Humans being the victims of alien invasions, sometimes being destroyed or subjugated while more often than not managing to fight back and destroy the invaders. However, many works portray at least some alien species to be allies of Humanity, sometimes even coming to Earth with gifts or seeking help of some sort. Through alien eyes, Humans could be seen as friends, monsters, potential slaves, food, or as simply primitive or savage in relation to more advanced alien powers. Sometimes, said more advanced powers will judge Humanity, often deeming Humans a threat to themselves or the greater galaxy, with the occasional subversion.

In the works of science fiction author Isaac Asimov (when they feature aliens at all), Humans are often portrayed as a unique species among aliens in some aspect or another, as opposed to other works where aliens are similar to Humans in appearance, society, or both. In "The Hostess", Humans are the only intelligent species to walk bipedally, and the only one to be omnivorous. They're also the only species which needs to sleep and has the ability to dream, and the only one with a biologically-finite lifespan. Humans are the only ape-derived species not to end up devastated by a nuclear war in "The Gentle Vultures"; the only species to which group psychology is applicable in "Homo Sol" and its sequels; and the only species in the galaxy which reproduces sexually in "What Is This Thing Called Love?".

Master of Orion: Conquer the Stars