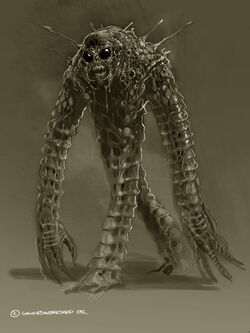 Warhammer 40,000 Universe
The Hrud, also known as the Nocturnal Warriors of Hrud, are crouched, rat-tailed diminutive creatures that swathe themselves in rags, obscuring their faces with hoods. Being nocturnal organisms they prefer the darkness and are basically scavengers and tunnel-dwellers. While their homeworld is unknown, they are a cosmopolitan species, being found all over the galaxy although never in large numbers. As such they are considered parasites despite their sapience and when referred to are usually stated as infesting a location.

Observing a Hrud is usually difficult even within a well-lit room due to a distortion field of unknown origin that emanates from their species, preventing the eyes of other beings to properly focus upon them. Another field that is produced by the body of a Hrud is an innate entropic field that has a devastating side effect of aging their surroundings, likely by rapidly decomposing cell structures through a radioactive isotope. This can lead to objects such as crops to crumble to dust due to prolonged exposure while species such as Humans can suffer premature aging. Other defensive abilities include the exuding of various poisons from their skin and that their cells rapidly deteriorate after death, causing their corporeal form to rapidly liquefy, conveniently making detailing the creatures impossible.

In addition to all of this their limbs also have a bone structure most similar to the Human spine, which allows the limbs to bend in any direction, earning them the nickname "Bendies".

The Hrud were supposedly all but cleansed by the Iron Warriors during the Great Crusade, although it is now quite obvious that they still exist as they widely infest the many parts of the galaxy. Later encounters between the Imperium of Man and the Hrud include the Cinchare Hrud Infestation and the Plague of Delphic. A notable engagement against the Hrud came in 783.M41 during the Infestation of Ursula Spinal where an agri-world became the subject to migration, quickly having its plantations of hydro-crops turn to dust and its defenders aging fifty years over the span of a few months. To combat this threat, six regiments of Valhallans made planetfall to purge the colony from infestation, although half of the regiments suffered premature aging themselves due to contact with the Hrud, and were declared as unfit for further duty.

The Hrud are meticulous record keepers and have thus compiled large libraries of data. They also follow the belief in a pantheon of gods called the Slah-Haii. One of these gods that they worship is called Qah and is also known as "He who lingers". This god is said to have been the protector of the Hrud during the times when they lived above ground in the sun; however, when the C'tan began a war against the Old Ones and thereby started attacking the Hrud, Qah informed them to move below ground to become nocturnal warriors as they now are. Sometime later Qah was destroyed by Slaanesh, split into many partes to create the Umbra but survived long enough to tell his Hrud followers that he would one day return to defeat the Yaam-khoh, which's meaning is still unknown to non-Hrud.

While nearly all Hrud technology is scavenged from other races, one weapon of their own design is the Hrud fusil, a weapon based on warp-plasma technology.