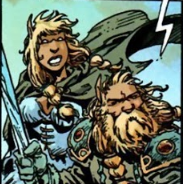 The descendants of the original colonists of Pathacele, the Hrolfs were drive to the fjords. There they were relatively safe from the Pathacelces due to the fact that the hot springs contained galwax bacteria, a substance deadly to the shape-shifting natives.

Four thousands prior the Hrolfs made their living servicing tourism and ritual sacrifices to the off worlders.

The Hrolfs are famous for their courage and bravery. Their banquets are legendary, during which they retell sagas while drinking arsjork.

According to their ancestral traditions the Hrolfs believe that they can take a hero’s courage and bravery by consuming them. They follow the ritual making that the Warrior who are about to consume the body have their spirits raised. The Hrolfs also make sure that the victim purges all his or her virile fluids which involves bedding with multiple women.

Retrieved from "https://aliens.fandom.com/wiki/Hrolf?oldid=146969"
Community content is available under CC-BY-SA unless otherwise noted.