Alien Species
Register
Don't have an account?
Sign In
Advertisement
in: The Angry Beavers Universe, Predators, Creatures of Unknown Origin,
and 8 more 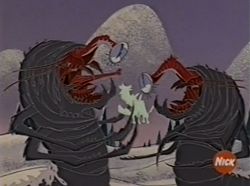 When Daggett reads the comic book, he gets terrified, and a snowstorm convinces him that the Leeches are arriving. When his brother Norbert disappears, Daggett believes that Norbert has been eaten by the Leeches; that he (Daggett) is the last Beaver on Earth; and that the Konspiracy Kevin doll is his only friend now. Soon the Leeches appear and Daggett is scared stiff, but it is revealed that the "Leeches" are actually just Norbert and some friends disguised to play a prank on him. Daggett is happy to know that there are no Leeches after all. However, the 37% truth guarantee is soon revealed to be real as a pair of actual Howler Leeches shows up, only to take a frozen dog as a souvenir and return to their spaceship.