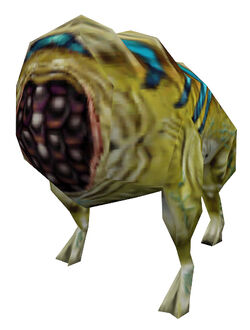 Half-Life
Houndeyes, sometimes referred to as Sound Hounds or whistlers are a pack-hunting organism indigenous to the dimension known as Xen, which superficially resemble dogs or other canine species from Earth.

They possess little more than a tripodal stance and a thorax, with faint yellow-green skintone and electric blue striped markings across their back. However, their most prominent feature is their seeming lack of a head of any sort, which appears to be replaced with a gigantic, black, cyclopean compound eye, which possesses a single eyelid, presumably present to protect the eye from harm (although compound eyes are not as weak as typical eyes, and this may be present as a defense against natural weather patterns on Xen, such as possible dust storms).

Although they may at first appear harmless, they can be a deadly adversary to an unwary foe. They are unhappy, timid, vulnerable, and shy when apart from their pack, and generally may exhibit a form of cowardice if approached during these situations. However, they are excellent pack hunters, typically hunting in groups of three or more. During attacks, they display resonant behavior, emitting destructive harmonic soundwaves which are capable of injuring the victims by way of rupturing their internal organs. Those who survive an attack by houndeyes report symptoms which include deafness and migraine headaches.

Although it is not generally witnessed, they have been discovered to be carnivorous creatures, as one was found feeding on a dead security guard during the events portrayed in Half-Life: Blue Shift. The houndeye's mouth is located on the underside of its belly, close to the eye, and appears to be filled with fang-like incisors. If well-fed, houndeyes will not exhibit and engage in harmonic behavior unless they are threatened, or during their seasonal mating sprees.

Houndeyes are very social creatures, and communicate to other pack members through a series of high-pitched yips which have been compared to the barking of dogs.