"By simply straining I can see farther and farther back. Now I am going back through strange curves and angles. Angles and curves multiply about me. I perceive great segments of time through curves. There is curved time, and angular time. The beings that exist in angular time cannot enter curved time. It is very strange."
―Halpin Chalmers, "The Hounds of Tindalos". 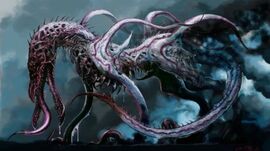 Unknown (able to move through time and space)

The Hounds of Tindalos

The Hounds of Tindalos, according to Halpin Chalmers, is a name that the Greeks used to refer to a strange species of interdimensional predators, which can travel through time freely, and even track down time travelers by scent.

These creatures are natural denizens of the "angles of time"; in contrast with humans and other species, which inhabit the temporal "curves". As such, they can manifest themselves in any spatial angles, such as the corners of walls and furniture.

Because their native realm is so different from ours, it's not easy for a human observer to describe them, and there have been conflicting accounts, even by the same observer. They're named "hounds" because they can track targets by scent, rather than due to any similarities to an actual canine.

Halpin Chalmers first suggested that "they have no bodies, and they move slowly through outrageous angles", but later mentioned their "lean, hungry bodies", and finally admitted to being uncertain as to whether or not they had bodies. He is certain, however, that he could hear them breathing; and later mentioned that they had tongues.

The Hounds are also associated with a kind of smoke that pours into our reality when they manifest themselves; as well as a very strong and unpleasant odor which is described as "acrid and nauseous". It's not known whether this originates from the Hounds themselves or the atmosphere of their native realm.

Victims of the Hounds are found decapitated and exsanguinated, and stained with "a peculiar bluish pus or ichor". Laboratorial analysis of this substance has found it to be organic, but entirely unlike anything produced by Earth organisms; being completely devoid of enzymes. It's believed that this lack of enzymes, and therefore a lack of cellular degradation, makes them biologically immortal.

Retrieved from "https://aliens.fandom.com/wiki/Hound_of_Tindalos?oldid=187625"
Community content is available under CC-BY-SA unless otherwise noted.