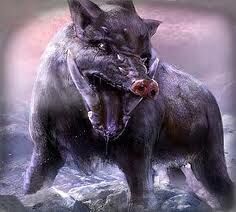 Hoth hogs are a species of porcine, non-sapient quadrupeds, and can be found on the icy planet of Hoth. The instance that there was the mention of Hoth hogs was Luke Skywalker have encountered the Hoth hogs during his patrols of the are around Echo Base during the Galactic Civil War.

Hoth hogs can be found in the icy planet of Hoth. They are mammalianoids and are covered with fur that help them to survive harsh conditions and cold. Under fur, they pose gray-blue skin and a mane covering their head, neck and back. They also have red eyes. Like the usual Earth boar, they have tusks and snouts. The difference between a normal boar is that their canines are extended and much longer. These canines replace the tusks of the normal hog. On their nose and above their eyelids, they have extra horns for defense.

However, Hoth Hogs were one of the lowest part of the food chain in the planet’s ecosystem, and had many predators. The main hunters of the Hoth hog are the Tauntaun, camel-like reptilians. The Hoth hog is a herbivorous creature, feeding on fungus- and lichen-equivalents that grow frozen layers. Other than that they also feed on floating algae-equivalents. Their size are that of a normal hog due to few sources of food. Like the usual pig they are weak and a favorite prey of most of the fauna there; that is why there are few seen on the planet Hoth. Even so, they are the main source of meat on-world. They are wild animals and are not domesticated unlike the Tauntauns. They are considered as scavengers roaming from one place to another.

Retrieved from "https://aliens.fandom.com/wiki/Hoth_Hog?oldid=195790"
Community content is available under CC-BY-SA unless otherwise noted.